Yes, Virginia. There is a Purgatory. 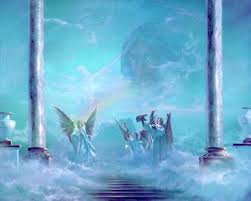 Catholics have great jokes. And we should. Heck we’ve been around 2000 years, so we’ve had lots of time to come up with them. Jokes about confession are probably the most numerous, but purgatory ranks right up there.

Here’s one for you:

A recently departed soul reaches Heaven’s gate and is advised that he’ll be needing to spend a little time in Purgatory before he can get into the Big House. An Archangel escorts the man to Purgatory where they enter a long hall with three doors. The angel explains that there are three ways to spend one’s time in Purgatory and each soul gets to choose his own form of discomfort.

The man then requests to see behind door #3. The man sees all sorts of folks walking about with cocktails, chatting, and carrying on. The only down side was that they were knee deep in sewage. “Well”, thought the man. “This can’t be all that bad.” So he informs the angel that he’ll take door #3.

“No problem” says the angel and he leads him into the room, introduces him to the rest of the folks, hands him a martini, and the man joins the party. About 10 minutes later the angel claps his hands and says “Okay, folks. break's over - everybody back on your heads.”

Purgatory, like confession, and other uniquely Catholic practices and beliefs, provide fodder for many such stories, probably because such things are mysterious and often little understood.

So let’s take a quick stab at Purgatory, especially since its existence is rejected by most non-Catholic Christians and little understood even by most Catholics. As a matter of fact, many Catholics are under the impression that Vatican II “did away” with Purgatory. I’m afraid that’s not the case. 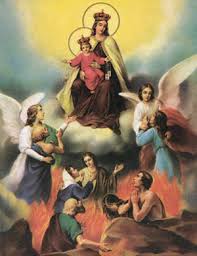 aragraph 1030. But essentially the Church teaches 3 things about Purgatory:

Most non-Catholic Christians will be too scandalized by now to read further, so we'll just continue with the Catholics...or at least some of them. Let's work backward on our 3 points.

Not much more to say about #3. The word Purgatory implies "purgation", cleaning, purging, etc. So you know something's going on there that probably isn't too pleasant. We do find some references to a purgatorial type of suffering in Scripture:

Luke 12:58 tells us a prison that we may have to endure until we "pay the last penny": "If you are 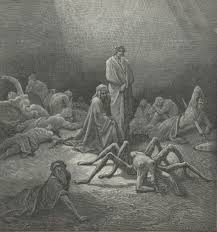 Luke 16:19-31 gives us the story of the poor man, Lazarus, and Dives, the rich man, who calls out from a place of torment after his death and asks Lazarus to warn his brothers. We know that Dives cannot be in Hell, because in Hell one is no longer capable of doing or desiring good, which Dives tries to do (warn his brothers). This is an interesting story because it comes from the lips of Jesus himself. The story also refutes the so-called "soul sleep" that some believe. Dives is very much alive in this parable.

As for #2 and why we'll need to spend some time there, Church teaching is based on 5 words in Revelation 21:27: "nothing unclean will enter it". The "it" is Heaven and the "unclean" is most of us, since most of us will not die in a state of complete perfection except for genuine martyrs which the Church defines as those who have shed their blood for the Faith. However, only God can judge the heart so we know not who else God may have allowed to reach a state of perfection while still in this life.

Many of our non-Catholic Christian brethren believe that regardless of the woeful state of our soul at death, Christ's blood will cover us, and so long as we believe in Jesus, we'll skip right into Heaven. While they are welcome to believe that, believing it doesn't necessarily make it so. Discussing that here would take us into a separate discussion into what constitutes "salvation". So for now we'll need to suffice it to say that while Catholics also believe that we are covered with the Blood of Christ, we believe that we are also called to take up our cross and may indeed to have to shed a little blood of our own.

Now to the first point: there is such a place or state. Yes, we know the word Purgatory is not in the Bible and we're not going to get into a discussion here about "solo scriptura", but let's take a look at Revelations 20:13-14:

What is "Hades"? Most will say it is "Hell", or more precisely, Gehenna, the place of eternal torment. But it's not, for we see that Hades itself is "thrown into the pool of fire" (lake of fire in some translations). Can't throw Hell into Hell, so Hades has to be something other than Hell. It's obviously a THIRD place.

What's more is that there are people in it since it says that "Death and Hades gave up their dead". We are well aware of the existence of a third place called "the bosom of Abraham" where the righteous went to await the coming of the Lord. But there was no need for the "bosom of Abraham" after Christ opened the gates of Heaven.

So here we have a "third place" with people (souls) in it at the end of time (at the time of the Final Judgment). So what could it be and why are there souls in it? They're obviously not in Heaven, and as we explained, Hades isn't Gehenna.

So, maybe the Bible doesn't call it Purgatory, but there is certainly a "Third Place" in Scripture, and we can only imagine that since these souls are not yet with the Lord after their death that there must certainly also be suffering...if only the suffering of waiting.

1. Scripture shows us a place that is not Heaven and is not Hell.
2. Souls are in this place.
3. The souls are not damned or they'd be in Gehenna and the "Hades" that they are in is not Gehenna.
4. This New Testament "Hades" is not the "bosom of Abraham" of the Old Testament.
5. The existence of this place of waiting is consistent with the Scripture references to "paying the last penny", "being saved as through fire", "this place of torment", etc., but especially with Revelation 21:27 which reminds us that "nothing unclean shall enter it."

Because most of us will die in a state of imperfection but still desirous of union with God, God's Mercy demands that we be allowed a state of final purgation so that we CAN "enter it". This is not the second chance that some think Purgatory is, just a final state of purgation for those who have already sought God's Mercy.

But even if you dont' accept the need for a Purgatory, Scripture clearly shows that there is one. Guess we'll find out for sure some day. I already am sure.