Why Confess Our Sins to a Priest 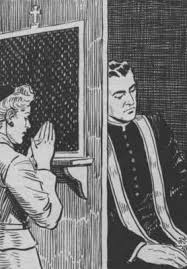 It's a common retort from those who reject the Catholic teaching on the Sacrament of Confession. And it sounds logical. Since only God can forgive sin, then it would seem reasonable not to bother with anybody in between. Might as well go straight to God.

So the next question is "who is the one another?" that James is referring to? On the face of it it could mean just anybody off the street. Obviously he didn't mean just anybody, so who he did he mean?

Like so many questions about the Scriptures, the answer is easy when put into context of the neighboring verses. Two verses before, James is advising the physically sick to seek out the "presbyters". Two verses later he is addressing the spiritually sick, those who need to confess sin. It's easy to see who James was referring to. But who were the presbyters?

In short they were overseers, men especially delegated to overseeing and ministering to a local Christian community. In any event, they were granted a special authority to stand in place of the bishop, who then, as today, had the full authority that was granted to the Apostles.

But if only God can forgive sins then what's up with confessing to another human?

It's a simple matter of taking Jesus at his word in John 20:23 where he says to the Apostles gathered in the upper room "Receive the Holy Spirit. Whose sins you shall forgive are forgiven and whose sins you shall retain are be retained."

Here Jesus gives the Apostles the power to forgive sins. It's interesting to note that, at least in this Gospel, this is Jesus' VERY FIRST action upon rising from the dead, which should give us a clue as to how important the power given to the Apostles was and still is.

If Jesus had wanted us to only confess our sins to himself he wouldn't have given the power and the command to the Apostles that he did. We should also note that the sins must be confessed audibly since only then would the Apostle know whether the sin should be forgiven or retained.

There is no doubt from Scripture that Jesus gave the power to the Apostles to forgive sins. The question is did that authority to forgive or retain sin pass on or did it die with the Apostles? The fact that James is instructing his audience to confess sin to one another indicates that the authority had descended from the Apostles and had been granted to others.

Today, by virtue of his ordination and the laying on of hands,that goes all the way back to the Apostles, the priest, the descendant of the "presbyter", has the authority to forgive or retain sin in the name of Jesus Christ who first gave that authority to a group of specific men.

Here is an excerpt from the Catechism of the Catholic Church regarding the Church's teaching on the Sacrament of Penance.

VI. THE SACRAMENT OF PENANCE AND RECONCILIATION

1441 Only God forgives sins.39 Since he is the Son of God, Jesus says of himself, "The Son of man has authority on earth to forgive sins" and exercises this divine power: "Your sins are forgiven."40 Further, by virtue of his divine authority he gives this power to men to exercise in his name.41

1442 Christ has willed that in her prayer and life and action his whole Church should be the sign and instrument of the forgiveness and reconciliation that he acquired for us at the price of his blood. But he entrusted the exercise of the power of absolution to the apostolic ministry which he charged with the "ministry of reconciliation."42 The apostle is sent out "on behalf of Christ" with "God making his appeal" through him and pleading: "Be reconciled to God."43

Reconciliation with the Church

1443 During his public life Jesus not only forgave sins, but also made plain the effect of this forgiveness: he reintegrated forgiven sinners into the community of the People of God from which sin had alienated or even excluded them. A remarkable sign of this is the fact that Jesus receives sinners at his table, a gesture that expresses in an astonishing way both God's forgiveness and the return to the bosom of the People of God.44

1444 In imparting to his apostles his own power to forgive sins the Lord also gives them the authority to reconcile sinners with the Church. This ecclesial dimension of their task is expressed most notably in Christ's solemn words to Simon Peter: "I will give you the keys of the kingdom of heaven, and whatever you bind on earth shall be bound in heaven, and whatever you loose on earth shall be loosed in heaven."45 "The office of binding and loosing which was given to Peter was also assigned to the college of the apostles united to its head."46

The sacrament of forgiveness

1446 Christ instituted the sacrament of Penance for all sinful members of his Church: above all for those who, since Baptism, have fallen into grave sin, and have thus lost their baptismal grace and wounded ecclesial communion. It is to them that the sacrament of Penance offers a new possibility to convert and to recover the grace of justification. The Fathers of the Church present this sacrament as "the second plank [of salvation] after the shipwreck which is the loss of grace."47

1447 Over the centuries the concrete form in which the Church has exercised this power received from the Lord has varied considerably. During the first centuries the reconciliation of Christians who had committed particularly grave sins after their Baptism (for example, idolatry, murder, or adultery) was tied to a very rigorous discipline, according to which penitents had to do public penance for their sins, often for years, before receiving reconciliation. To this "order of penitents" (which concerned only certain grave sins), one was only rarely admitted and in certain regions only once in a lifetime. During the seventh century Irish missionaries, inspired by the Eastern monastic tradition, took to continental Europe the "private" practice of penance, which does not require public and prolonged completion of penitential works before reconciliation with the Church. From that time on, the sacrament has been performed in secret between penitent and priest. This new practice envisioned the possibility of repetition and so opened the way to a regular frequenting of this sacrament. It allowed the forgiveness of grave sins and venial sins to be integrated into one sacramental celebration. In its main lines this is the form of penance that the Church has practiced down to our day.

1448 Beneath the changes in discipline and celebration that this sacrament has undergone over the centuries, the same fundamental structure is to be discerned. It comprises two equally essential elements: on the one hand, the acts of the man who undergoes conversion through the action of the Holy Spirit: namely, contrition, confession, and satisfaction; on the other, God's action through the intervention of the Church. The Church, who through the bishop and his priests forgives sins in the name of Jesus Christ and determines the manner of satisfaction, also prays for the sinner and does penance with him. Thus the sinner is healed and re-established in ecclesial communion.

Email ThisBlogThis!Share to TwitterShare to FacebookShare to Pinterest
Labels: Confession, Sacrament of Penance

Posing a Roadblock to Gay Adoption

As documented in a CNS story dated 2/22/10, Catholic Charities of the Archdiocese of Washington D.C. will close its 80 year-old foster care and adoption program. The recent passage of a new law allowing same-sex marriage would have required the adoption program to treat different sex and opposite sex married couples equally in considering foster and adoptive parents for children, something the Catholic Church cannot do.

Proponents of same-sex marriage or its legal equivalent are constantly challenging opponents with the question "How does this affect you?" Those who are neutral about it are inclined to the "let them have their rights" attitude.

But time and again we see where this inversion of the most fundamental of all societal institutions, an institution upon which society itself is built and therefore precedes and pre-dates all societies and political orders, creates ethical dilemmas heretofore never imagined.

In short, will it be good for the child to see daddy and daddy in bed together. (What child hasn't stumbled upon an intimate moment between parents?)

Gays and lesbians make the claim that they are genetically wired towards same-sex attraction. Barring all the evidence to the contrary, let us grant them this point and ask "what about the child?" What if the child that they adopted is NOT "genetically wired" that way? How healthy is it for that child to be subjected 24-7 to a parental model that is the very antithesis of his or her physical and psychological being?

Gays will want to make the same point, that subjecting a child who may be "genetically wired" towards the same-sex, to an opposite-sex parental model, is just as unfair and unhealthy.

But in this argument, the gays and lesbians have laid their own trap. Since the entirety of their argument for gay rights as civil rights is based on something they consider to be an immutable characteristic, a gay gene, then before gays and lesbians are allowed to adopt a child, the child, out of respect for the civil rights of the child, must be first genetically tested and his or her gender identity genetic predisposition determined.

Of course, this cannot be done. There is no test because there is no gene. Gays will argue otherwise, but science has no test for a gay gene that could be used to determine the gender identity of a child.

And since the child to be adopted is the product of a man-woman relationship, whatever the defects of that relationship, the child then has a civil right to be placed in a child-parent relationship that most resembles his or her own biological origins. It is on this basis, on the rights of the child, that gay adoption, under any circumstances, must be denied.

Some may question if this affects adoption by singles. This too poses a dilemma, but again, one which is easily answered if the rights of the child are considered to be primary.

While some may not subscribe to the document, few intelligent people would argue with the basic demands of the United Nations Convention on the Rights of the Child. Article 7 states that the "child has a right to know and be cared for by his or her parents."

In the case of an abandoned or orphaned child, the law of "being cared for by his or her parents" guides us to the next best possible solution where the child is cared for by the next of kin, something that has happened naturally for millenia.

Barring that possibility the next best situation for the child would be adoption or at least foster care by a married man and woman, again, the decision being guided by the rights of the child "to know and be cared for by his or her parents". The (married) man/woman/child model best approximates the natural family and best serves the rights of the child.