The Adoption Argument for Same-Sex Marriage

Following is a letter to a local radio talk show host who commonly resorts to the needs of parentless children as a justification for same-sex marriage. It's a common, emotional, and seemingly rational appeal.
Dear XXXXX:
Hope you'll take a minute to consider a few thoughts regarding same-sex marriage. I heard you talking about gay marriage and adoption. As a talk show host, I realize that often times you may be saying things simply to provoke conversation, which of course is your job, so I don't necessarily think that everything you say is what you personally believe. But in case you don't already know....
There is no shortage of heterosexual married couples in the United States, including Guam, who are waiting to adopt a child. Just google the words "waiting to adopt". There are even "waiting to adopt"' support groups. In Guam, since we have no adoption agency or legal entity that keeps track of such things, we have to go to the people who facilitate adoptions to get any kind of data. Kamalin Karidat is the most active organization in local adoptions. I am told that there are at least 20 couples at any one time waiting to adopt and they sometimes have to wait years. 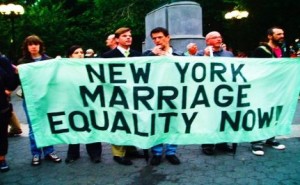 Last Friday, New York became the sixth state to legalize “gay marriage”. Catholic lawmakers provided the key votes and a Catholic governor signed the bill into law. Catholic senator, Mark Grisanti, said that though he was raised to believe that marriage was between a man and a woman he could not “legally come up with an argument against same-sex marriage.”

“When legislation in favour of the recognition of homosexual unions is proposed for the first time in a legislative assembly, the Catholic law-maker has a moral duty to express his opposition clearly and publicly and to vote against it. To vote in favour of a law so harmful to the common good is gravely immoral.” (Congregation for the Doctrine of the Faith, Considerations regarding proposals to give legal recognition to unions between homosexual persons, June 3, 2003, Joseph Cardinal Ratzinger, Prefect)