(Most of the historical background is sourced from The Wonder of Guadalupe: The Origin and the Cult of the Miraculous Image of the Blessed Virgin in Mexico by Francis Johnston, Tan Books, 1993)

During the Christian reconquest of Spain in the thirteenth century, the Blessed Mother appeared to a cowherd tending his cattle near a village named Guadalupe and told him to dig in a certain spot. He did as instructed and unearthed an iron casket in which was found a statue and a note about its identity.
The statue was a likeness of the Blessed Mother. Christians fleeing the Muslim invasion of Spain in the 8th century had buried it there in an unmarked location to protect it from destruction. The statue was said to have been carved by St. Luke himself and had been a gift from Pope St. Gregory the Great to the bishop of Seville.
A chapel was erected on the spot and soon became a popular shrine. Queen Isabella was a frequent pilgrim. Christopher Columbus was said to have invoked the help of Santa Maria de Guadalupe several times during his voyages and prayed at the shrine on several occasions. His flagship carried her name and he christened an island in the Caribbean in her honor. The explorer, Hernando Cortez was also a devotee.
One not-so-famous pilgrim was a humble Franciscan priest named Juan de Zumarraga who was on his way to the New World to become the first bishop of Mexico. It was to Fr. Zumarraga (he was bishop-elect at the time) that an aging Aztec, with the Christian name, Juan Diego, would show his tilma filled with flowers at the instruction of the Blessed Mother on December 12, 1531. 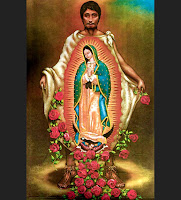 Of course, it wasn’t the unseasonal flowers that caught the attention of Zumarraga, but the fantastic image of the Blessed Mother emblazoned on Diego’s coarse cloak made of cactus fibers.  Zumarraga immediately recognized the image as that of the Immaculate Conception and ordered a procession with the tilma in her honor.  (Though the proclamation of the dogma of the Immaculate Conception was yet three centuries away, her feast under that title had been kept for several centuries, especially by the Franciscans.)
In addition to the miraculous image, the Blessed Mother also gave us her name. It would take another 130 years for Spanish authorities to realize that this name was not “Guadalupe”, but a phonetically similar Aztec word which they guessed to be Tequantlaxopeuh (pronounced “Tequetalope”), which means “she who saves us from the devourer”. A later study determined that the name was more probably Te Coatlaxopeuh which translates: “She who crushes the stone serpent.” 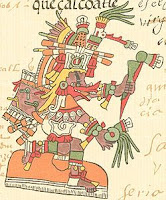 For the Aztecs, “the devourer” and the “stone serpent” were one and the same: the dreaded Aztec god, Quetzalcoatl, to whom tens of thousands were sacrificed each year by having their beating hearts gouged out of their living chests.
Despite the confusion over the name, the Aztec understanding of who the Virgin said she was and Zumarraga’s believing her to be the Immaculate Conception, were easily reconcilable. One of the scriptural foundations for the Immaculate Conception is Genesis 3:15 where, upon the fall of Adam and Eve, God warns Satan: “I will put enmity between thee and the woman and between thy seed and her seed. She shall crush thy head, and thou shalt lie in wait for her heel”.
With Quetzalcoatl, the serpent, drinking the blood and eating the hearts of tens of thousands of Aztecs every year, the Franciscan missionaries saw the catechetical opportunity in associating the “woman” of Genesis 3:15 with the Aztec understanding that the woman on the tilma was “she who saves us from the devourer”. Within a few years, over eight million Aztecs converted, the largest single mass conversion in history. 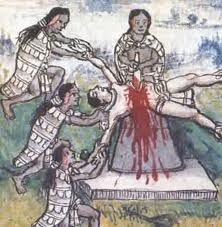 But let us jump forward to our own time in which “the Devourer” has so obviously returned. While we no longer rip the beating hearts from the chests of living humans, we  do rip living humans from their mothers’ wombs at the rate that makes the sacrifice to Quetzalcoatl look tame. Whereas the Aztecs would kill as many as 20,000 humans a year, we do that through abortion, in the U.S. alone, every 5 days.

Perhaps it is just coincidence, but there is no denying that abortion on a massive scale took root in our society at the same time devotion to the Blessed Mother began to wane in the post-Vatican II confusion over her identity. Perhaps the most obvious evidence of a change in thought about Mary’s role in our redemption is the modern retranslation of Catholic bibles in which the “she” of the “She will crush thy head...” in Genesis 3:15 is replaced with “he”, and in at least one translation (New Jerusalem), “it”! Check your bibles.
Of course, the “he” is Jesus. But the traditional “she” never implied that it was Mary alone who would crush Satan. It was always blazingly clear that the “she” of Genesis 3:15 meant “Jesus through Mary”, a fact enshrined in the centuries-long practice of depicting Mary standing on the head of the serpent, and infallibly declared in the Dogma of the Immaculate Conception which proclaimed:

“...so the most holy Virgin, united with him by a most intimate and indissoluble bond, was, with him and through him, eternally at enmity with the evil serpent, and most completely triumphed over him, and thus crushed his head with her immaculate foot.” - Pope Pius IX, Ineffabilis Deus, December 8, 1854
The mid-passage shift to the male or neuter pronoun is also glaringly awkward. In the first part of the verse it is clear that God is speaking of “the woman”: “I will put enmity between thee and the woman and between thy seed and her seed.” It is quite natural that the verse would now continue with what that woman is going to do: “She will crush thy head...”
However, our modern Catholic translations now abruptly interrupt the context of the passage and insert the male pronoun, while the New Jerusalem Bible  - seemingly wont to smooth the obvious bump - opts for a middle ground and inserts the neuter “it”. In any event, Mary, disappears from the text and her redemptive role is seemingly diminished to nothing more than a “useful conduit”, which is what most non-Catholic Christians deem her to be.
It’s easy to see why modern Protestant translators would want to diminish Mary’s stature in scripture, but why did we do this to our own translations?
Modern scholars argue that the Hebrew in Genesis 3:15 used a word that did not specify “she”, and perhaps, motivated by the current spirit of ecumenism at the time of the newer translations (ca. 1966-1970), they opted for a pronoun less challenging to non-Catholics who do not accept Mary’s full role in God’s plan of salvation. 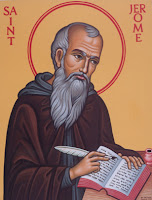 St. Jerome, who translated the Hebrew into Latin in the 4th century, was well aware of lack of specificity in the Hebrew, but from the context, as just demonstrated by the awkwardness of shifting genders in mid-verse, Jerome opted for the feminine “ipsa”. The Catholic Encyclopedia explains why:
“The reading "she" (ipsa) is neither an intentional corruption of the original text, nor is it an accidental error ; it is rather an explanatory version expressing explicitly the fact of Our Lady's part in the victory over the serpent, which is contained implicitly in the Hebrew original.”
It is not surprising, and perhaps expected that these same translations, after appearing to alter Mary’s redemptive role in Genesis, also deleted “full of grace” from the angelic salutation in Luke 1:28, which is the other foundational scripture reference for the Immaculate Conception. In most modern Catholic translations “full of grace" has been replaced with “favored one” or “highly favored”, which is how Protestant bibles already had it translated.
This may all seem like linguistic minutiae and no big deal, but a quick “google” will show that Protestants depend specifically on “favored” in place of “full of grace” to disprove Mary’s Immaculate Conception, and THAT’s a big deal!  And with the adoption of the New American Bible in 1970 (which uses “favored one”) as the official translation of the U.S. Catholic Church, it might seem that we decided to help them along.
As a matter of fact, for nearly three decades (1970-1998), on the Feast of the Immaculate Conception, Catholics had to read and listen to a Gospel translation that not only did not proclaim the Mother of God as “full of grace”, the very thing we were celebrating, but a translation that also underscored the Protestant diminution of Mary. (And we wonder why so many Catholic are so easily pried away from their Church when challenged to defend Catholic Marian doctrines!)
Thankfully, in 1998, the Sunday and Feast Day Lectionary was revised and “full of grace” was restored to the Gospel of December 8, but “favored one” continues to appear in the translation (NAB) that is used in almost all of our parishes and schools. (I can’t help but observe that maybe it’s not such a bad thing that many Catholics don’t read the Bible, at least Genesis 3:15 and Luke 1:28) 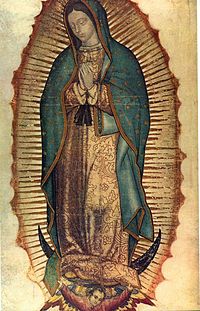 On December 12 we celebrate the feast of the one who revealed herself as “she who crushes the head of the serpent”, the one “who saves us from the devourer”, the woman of Genesis 3:15 who appeared to the New World pregnant with the promised “Seed” of salvation, and burnt her image into the rough weave of cactus fibers that we might, 500 years hence, yet be reminded of who she is and what she was ordained by God from the beginning to do.
Perhaps the Mother of God gave us her name at Guadalupe in anticipation of the present confusion.  Perhaps our bibles should once again reflect what has been infallibly proclaimed: that “the most Blessed Virgin was, in the name and by order of God himself, proclaimed full of grace”, and that the head of Satan was and is crushed “with her immaculate foot” (Ineffabilis Deus).
Perhaps we should learn how to say “Te Coatlaxopeuh”, that we might call on her as the Aztecs did, for in the maddening escalation of the current culture of death, it seems that Quetzalcoatl, the Devourer, has ravenously returned.