PIUS IX: "AND THUS CRUSHED HIS HEAD WITH HER IMMACULATE FOOT" 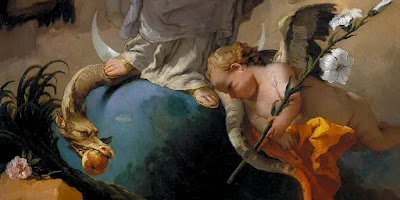 Today is December 8, the Feast of the Immaculate Conception, and time for my sometimes annual mini-rant about translations, and in this case, a particularly terrible translation in that it kicks Mary out of the plan of salvation.

For years, probably since about 1970, the Gospel reading for Mass on this day (Lk 1: 26-38) did not use the words "full of grace" - which is the very basis of the Dogma of the Immaculate Conception - but used  "favored one," or "highly favored," or something like that.

The New American Bible, the translation in standard use in the United States, and the translation that every Catholic school kid is stuck with, still uses that language:

And coming to her, he said, "Hail, favored one! The Lord is with you."

Sometime in the mid-1990's, Pope John Paul II issued an instruction to fix that language, at least in the Lectionary, and so now we hear "Hail, full of grace" on the Holy Day set aside to specifically recognize and honor She who was and is "full of grace" from the moment of her conception.

However, the language of the First Mass Reading on this day was never fixed and Genesis 3:15 still reads:

I will put enmity between you and the woman, and between your offspring and hers; he will strike at your head, while you strike at his heel.”

Again, this was a circa 1970 invention and prior to this "updating" - made possible by the elimination of Latin and the vagaries of new vernacular translations - the faithful at Mass, on the Feast of the Immaculate Conception, heard:

I will put enmities between thee and the woman, and thy seed and her seed: she shall crush thy head, and thou shalt lie in wait for her heel.

There are two significant differences between the translation we heard today and the ancient one: First, there is "she" not "he." And second, the modern translation has Jesus and Satan striking at each other in what appears to be a battle of equals whereas the ancient text, in Latin (the Vulgate) has Mary CRUSHING a powerless Satan, i.e. Satan can only "lie in wait for her heel."

The Mary of the Vulgate, and the translation we heard for nearly 2000 years, is a much more powerful Mary, and said power underlies the reason for so many of her titles, including "Co-Redemptrix." Perhaps this is why - in the then-spirit of post-Vatican II ecumenism and wanting to get along with non-Catholics -  our own Catholic leadership got rid of the "she" in Genesis 3:15.

Scholars debate whether the "ipsa" in the Vulgate can be translated as "he" or "she," however, there is no debating the language Pope Pius IX chose to employ and define in Ineffabilis Deus:

Hence, just as Christ, the Mediator between God and man, assumed human nature, blotted the handwriting of the decree that stood against us, and fastened it triumphantly to the cross, so the most holy Virgin, united with him by a most intimate and indissoluble bond, was, with him and through him, eternally at enmity with the evil serpent, and most completely triumphed over him, and thus crushed his head with her immaculate foot.

It's curious, but since about 1970 when our Church leadership functionally dumped Mary as "Satan's head crusher," Satan has found his happy way back into the highest halls of power in our Church.

However, as if to "fight back" against the MODERNISM which has eviscerated Mary in our modern translations - and even on the very day we honor her in a special way - Mary, a few days later in the liturgical calendar (Dec. 12) appears in Mexico and gives us her real name:

"Te Coatlaxopeuh” ("she who crushes the stone serpent"). 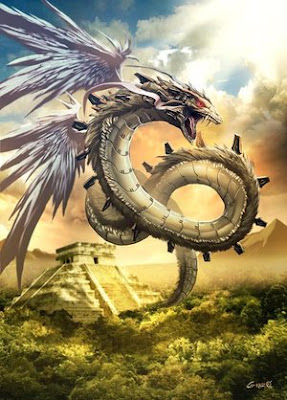 Read more at THE RETURN OF THE DEVOURER