Why I am Catholic - Part 2: the possibility of eternal damnation

All of us experience pain. But at the root of our ability to endure pain is the belief that it is not permanent, or at least that its intensity will be dulled with time, or in extreme cases - that death will bring release.

However, eternal damnation has no such hope. Its proponents posit that it is a living death, where one is always dying but never dies. While we might sneer at such a prospect, our sneering does not diminish the odds that it might be real. We really don’t know for sure, do we?

A popular argument against such a horrific eternity is “What sort of a God would make such a place and condemn people to it?” The question is understandable. Both inexplicable pain and the concept of eternal damnation have driven many to atheism or to embrace cyclical religious forms where at least the tortures are not forever. However, whether we choose atheism, Buddhism, or a version of a loving God that does not punish, the possibility of eternal torment, at least for the intelligent inquirer, is diminished not a wit. So let us examine it...just in case.

We start with the religions that teach it. While most religious systems hold to some version of a state of post-death torment, most do not hold to its being eternal, i.e. the suffering ends either with the annihilation of the soul or a release from hell after a period of purgation.

Surprisingly there are only two religions of any consequence that universally teach the existence of a place of of post-death torment to which the damned are sent forever: Christianity and Islam.

Of the two we will choose to examine Christianity for the following reasons:


Point 1 is self-explanatory. Islam arose in nearly 600 years after Christianity, and in a land largely infected by a Christian heresy (Nestorianism).

As for the second point, it doesn't take much human reason to see that choosing to die for the faith, often rather cruelly, versus killing for it, is a much more difficult choice and thus is an act of faith requiring more notice.

And, while it is true that Christians may have killed in God’s name, Christianity itself teaches no such thing. Islam does. While individual Muslims may choose a spiritual interpretation of such Muhammedan directives as “slay the infidel wherever you find them” (Surah 9:5), there is no getting around the literal reality of how Muhammed himself understood it. (He slew the infidels wherever he found them.)

Let us then examine the claims of the founders. Whereas Muhammed - and the founders of every other major religion - either claimed to have heard from God or found a way to him, only one founder of a major religion every claimed to BE God: Jesus Christ. And he went to his death without changing his story.

But what about that story? Can we really know there was a Jesus Christ? Couldn’t this be a monstrous ruse? After all, what we call the New Testament was written by Christians for Christians, so of course they could have made it up.

In response to those who doubt the biblical account, Christian apologists often attempt to make the case for Christ from extra-biblical sources. But the historical record for the Christian Jesus is sparse, and the authenticity of what does exist - such as the account found in the writings of the first century Jewish historian, Josephus - are usually discredited as the later interpolations of zealous Christian copyists.

Example: While few question the authorship of Plato’s Republic, Virgil’s Aeneid, or the works of Homer, there is far more evidence for the authentic authorship of the Gospels than there is for these unquestioned pillars of classical literature.

However, if such evidence would suffice then we would not have unbelievers, and yet we do. So, for our purposes, the historical evidence for Christ will need to be made from non-Christian historical sources already accepted as authentic.

Email ThisBlogThis!Share to TwitterShare to FacebookShare to Pinterest
Labels: Published Articles, Why I am Catholic 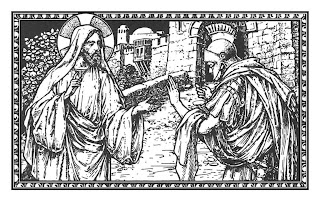 Why I am Catholic - Part 1: we begin at the end 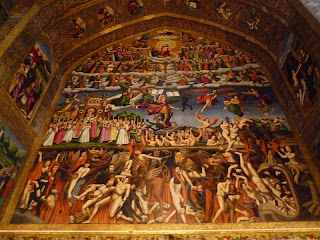 A few months ago I was asked to give a talk entitled “Why I am a Catholic”. While preparing the talk I thought of my many relatives and friends who have left the Church. While some have left for emotional reasons (they’re mad at somebody), and others for what I will just call “conjugal irregularities”, I believe most have left or dropped out for wont of a reasoned explanation to stay.

I have often ask such folks if there is a particular reason why they left and have they ever considered returning.

What is also amazing is how so much pain could be avoided by simply knowing how to engage such questions and where to look for the answers. Parents whose children no longer practice the Faith are particularly pained - particularly when grandchildren are involved. Parents who have grudgingly accepted the religious waywardness of their own children often find it more difficult to accept their grandchildren being raised in a different faith or no faith at all.

It is probably hearing other parents share their distress that first caused me to develop a short “Reason to be Catholic” for my own children. But rather than wait to be confronted with their doubts and questions, I opted for a pre-emptive catechetical strike to not only help them fend off challenges to the Faith, but to assist them in engaging those challenges so that they might be able to keep others from leaving the faith or even bring new souls to it.

In working to restate this “catechesis” for publication, I have augmented it for “big people” as a sort of mini “Case for Catholicism”, but it can be scaled up or down to address the desired audience in case you would like to use it or portions of it. Let's begin.

My “Case for Catholicism” begins with a certainty, the only real certainty: death. I will die. You will die. For all of us there is one, single, absolute, glaring, uncompromising certainty: we will die. On this, theist and atheist, must agree. So we begin at the end: death.

Upon death there are two possibilities: there is either an afterlife or there isn’t. It’s simply a 50/50 proposition. Atheists may argue against life after death but the argument does not change the odds.

Our prospects in the afterlife are many: We could live on as a cow. We could inhabit a tree. We could haunt a house. We could wander the universe. We could rule our own planet (Mormon). We might dwell in Paradise with 72 virgins (Islam). We could become a star, an angel, Elvis... There are as many proposals as there are belief systems, and then some!

However, there is one prospect that we must take more seriously than any other: the possibility of eternal damnation. The possibility of a living, conscious, state of eternal torment of body and soul is so frighteningly horrific that even the slightest sliver of a chance of it possibly being real demands consideration of the greatest gravity.

But, let us stop here and review: