ON THE FEAST OF ST. BENEDICT

A few days ago in Poland, President Trump characterized the current struggle with "terrorism" as a war between cultures, and questioned whether the West had the will to survive.

HOW ST. BENEDICT RESHAPED THE CULTURE

THE MISSION - A FATHER'S DAY THOUGHT

Today, I read in the Divine Office Intercessions:


"Man was created to glorify God through his deeds."


Yes he was. Immediately coming to mind was the old debate between faith and works, which is not a debate at all when it is understood as not an "either/or."

But then immediately following that thought and almost without hesitation was a vision of my amazing eleven children. If there are any deeds I hope God will judge me on it is this.

Not that I have done anything exceptional in raising them. Most of the time I was preoccupied with just how to survive, and not just financially, and was often confused on how to be a "good father."

WHAT ABOUT THE RIGHTS OF THE CHILD? 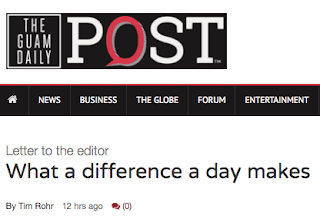 The “absolute nonsense,” according to Pesch, is Gillan’s claim that Guam law prevents the Director of Public Health from modifying a birth certificate to include the name of a lesbian parent as “father.”

Pesch states that he is “not familiar with any law that says the legislature is responsible for designing birth certificates,” and claims that Gillan has the authority to modify the certificate.

However, the next day, in another publication, Pesch is quoted as saying: “

“Other states have laws which consider family dynamics of similarly situated same-sex parents, but Guam doesn’t. And that’s what Guam needs to do…When it comes to surrogacy, we’re definitely behind other jurisdictions in the United States.”

What a difference a day makes. One day Pesch is claiming that there is no such law, and the next day he is demanding that Guam law catch up with the rest of the country.

But beyond this absurdity is the even more absurd: A lawyer demanding that a public official not comply with the law on the puerile basis that said lawyer is “sick and tired” of something he doesn’t like.

The fact is that Guam law clearly requires the full birth name of the father of the child on the birth certificate.

What Pesch really wants (in addition to the forcing of public officials to break the law) is a complete overhaul of a definition of terms in the name of “gender neutrality.”

Fine, but then we must also get rid of the words like “mother” as well as the sex of the child, since - following Pesch’s logic - defining a child as male or female at birth is apparently “prejudice,” and he’s “sick and tired” of that.

As recently as 1989, the United Nations said “Yes.” The child has “the right to know and be cared for by his or her parents.” (Convention on the Rights of the Child, Article 7.)

Reading the rest of the document there is no question that the UN’s definition of “parent” is “natural parent,” noting that sometimes adoption and foster care are necessary when a “child temporarily or permanently is deprived of his or her family.”

Further, many diseases and their cures are now traced to genetics. Does a child have a right at some point in his or her life to know the roots of his or her genetic makeup? i.e. his or her natural parents? Where would that be recorded?

In the mad embrace of adult rights there is no room for the rights of the child. How sad. How sadder still that many may suffer illness or disease needlessly because people like Bill Pesch helped to make it impossible for them to know where they came from.

This morning an email showed up in my inbox from CHRISTIAN FORUMS with the subject line: "Purgatory: Scriptural Or Not... Or Worse?"

The author of the post followed the usual sola scriptura logic of if it's not in the Bible it doesn't exist, but goes further, calling the doctrine of Purgatory (a specifically Catholic doctrine) "the ANTI-Christ."

I read a few of the replies, all of which appeared to agree with the author and some of which even went further in their condemnation of the Catholic doctrine and belief in Purgatory.

I decided to leave the following reply:

The presupposition is that everything that Jesus taught can be found in Scripture. Aside from the fact that Jesus left us nothing in writing, there is also the matter as to who gets to decide what constitutes "Scripture." Just for starters, the followers of Martin Luther say there are 66 books in the Bible, the Catholics say there are 73, and the Greek Orthodox, Syrian Orthodox, and Ethiopian Orthodox all add to that. So whose "Bible" shall we refer to?

Additionally, John 21 tells us: “There are also many other things that Jesus did, but if these were to be described individually, I do not think the whole world would contain the books that would be written.”

More than likely, the “many other things that Jesus did/taught” may well have occurred in the 40 day period between the Resurrection and his Ascension into heaven. If there ever was a time for Jesus to teach and the Apostles to listen, it certainly would have been during this period.

In Acts 1, Luke tells us: “In the first book, Theophilus, I dealt with all that Jesus did and taught until the day he was taken up, after giving instructions through the holy Spirit to the apostles whom he had chosen. He presented himself alive to them by many proofs after he had suffered, appearing to them during forty days* and speaking about the kingdom of God.”

Obviously there was much instruction during this period but nothing specific seems to be recorded in “scripture.” In fact, Luke references his “first book” (probably his Gospel), where he dealt with “all that Jesus did and taught UNITL the day he was taken up.” However, other than the Road to Emmaus account, nothing much else is said about what Jesus did or taught during this period. So it may be that this portion of Luke’s Gospel was lost.

Specific to your inquiry, though, regarding a scriptural reference to Purgatory. A “third place” which is not Heaven or Hell can be found in Revelation 20:13-14: “The sea gave up its dead; then Death and Hades gave up their dead. All the dead were judged according to their deeds. Then Death and Hades were thrown into the pool of fire.”

At this point I will copy a portion of what I have already written on the matter elsewhere with a link to the source:

The passage (Revelation 20:13-14) occurs within the context of a description of events which will occur at the end of time. One of the main events is that Hades will “give up its dead”. We know Hades isn’t Hell (understood as the place of eternal damnation) because Hell is noted separately as “the pool of fire”. And we for sure know that Hades isn’t Heaven. So what is it?

What are they doing there? There can be only one explanation. They are not deserving of Hell (or else they’d be there), and not yet worthy of Heaven (or else they’d be there). They are in fact, “spirits in prison”, which comports with Mt. 5:26: “you will not get out of there until you have paid the last penny.”  http://www.themassneverends.com/2012/11/heaven-probably-not-your-next-stop.html

Email ThisBlogThis!Share to TwitterShare to FacebookShare to Pinterest
Labels: Purgatory 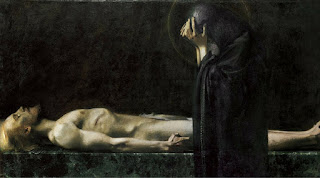