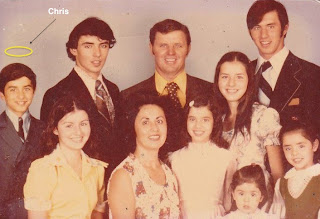 This story was printed in the U Matuna, the newspaper for the Archdiocese of Agana, Guam, September 30, 2012.

When I was ten-years old, my two-year old brother, Chris, was run over by a van - twice. My dad had been working on the family van in the driveway, and, unbeknownst to him, Chris had crawled under the van. Dad had finished fixing whatever he was fixing and was in the washroom cleaning his hands when Mom got in the van to go somewhere.

I still remember my dad's scream when, through the washroom window, he saw my mom back the van over Chris. Mom didn't know what she had run over. She had felt the bump and probably thought it was a tool or something. So she went forward to get off of the "bump" and ran over Chris again.

Again my dad screamed, and Mom, paralyzed with fear, stopped the van on top of Chris, the right front wheel sitting on the base of his neck.

Dad tore out of the washroom door, and, in what seemed to be an eruption of arms and steel, ripped open the back doors of the van, grabbed the jack, and furiously cranked the 3000 pound van off Chris while in a mix of shock and grief, Mom sobbed “Hail Mary’s”.


Even though this happened many years ago, I can replay the entire event in my mind with great detail. But the thing I remember most was the strange sense of peace I felt despite the horror before me. I remember even smiling as I watched. The whole thing felt “under control” though I didn’t know why...at least not then.

There are no words to describe the look on my parents’ faces when they brought Chris home from the hospital a few hours later. Chris was badly bruised and the tire tread was visibly embedded across his back, but not a single broken bone or damaged organ, and quite alive.

Needless to say, Chris was ever thereafter my mother’s favorite child and none of the rest of her eight children ever begrudged her a bit. But near-death experiences were not over for Chris.

As a teenager, he rolled his jeep down a mountain but managed to crawl out the badly mangled wreck. And a few days before his wedding, Chris and his fiance lay upside down in a pickup truck in the middle of an intersection. Another vehicle had run a red light and Chris’s truck had slammed into it so hard that it had flipped over the other vehicle and landed upside down.

At the wedding, Chris’s bride hobbled up the aisle in a cast and both were covered with cuts and bruises.

Guardian angels? Yes, perhaps. And perhaps that's why God gave us Chris on September 29, the Feast of St. Michael and the Archangels.

You might say that "Happy Birthday" has a special meaning for Chris...and for those of us who remember seeing his two-year old body underneath the van that day.

Of course, what we didn’t see was his Guardian Angel holding up the van till my dad could get the jack under it.