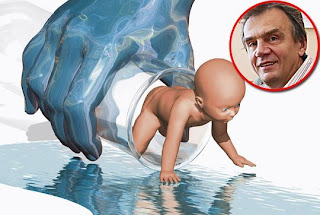 A Catholic friend recently shared how proud she was of a niece who had agreed to be a surrogate mother for a couple who was unable to conceive. She saw her niece’s willingness to carry a child for another as an act of charity and selflessness.

Like many Catholics, she either has no clue that her niece’s act is “gravely immoral” (CCC 2376) or believes, as do many Catholics, that she is free, as regards Catholic teaching, to “take it or leave it”, and yet remain a Catholic in good standing.

Until recently, access to reproductive technologies was expensive and thus rare, so it didn’t stir as much controversy as did the debate over contraception. However, cheap sperm can now be ordered off Craigslist and disposable artificial insemination kits picked up at a drug store.

In fact, this is what a lesbian couple in Kansas did recently. The couple had already adopted several children but wanted to have a child of “their” own. They placed an ad on Craigslist for sperm, found a donor, did the “do-it-yourself” insemination, and soon gave birth to a child.

The couple also did a “do-it-yourself” agreement with the sperm-donor which relieved him of any parental responsibilities. All was well until the couple split and the woman who bore the child became a “single mother”.

Upon losing her job, the mother sought state aid for the child. However, the state chose to sue the father for child support. Of course the father - or sperm donor (you see the problem) produced the document which he believed relieved him of any responsibilities. However, Kansas declared the the agreement invalid and the sperm donor is now on the hook for child support.

Of course, the donor is contesting this, and lawyers, judges, state officials, the media, and gay-rights folks have all hopped on to a finger-pointing merry-go-round which is reminiscent of the “much ado” in Shakespeare’s “Much Ado About Nothing”, except that it’s NOT about “nothing”, it’s about a child.

This mess allows us to see the wisdom of the church, which centers its teaching NOT on the happiness and rights of adults, but on the well-being and rights of the CHILD who has a RIGHT to be “begotten”, not “made”; and “to be conceived, carried in the womb, brought into the world and brought up by his own parents.” (Donum Vitae)

In its insistence on the rights of the child, the church has a curious ally. Not known for aligning its views with Catholic teaching, the United Nations in its Declaration of the Rights of the Child (1959) declares in Article 6 that the child “shall, wherever possible, grow up in the care and under the responsibility of his parents.”  In 1959, the laboratory generation of human life was yet science fiction, so by “parents” the U.N. meant the obvious.

The Declaration further echoes Church teaching on the rights of parents to educate their child: “The best interests of the child shall be the guiding principle of those responsible for his education and guidance; that responsibility lies in the first place with his parents.” (Article 7)

And Article 2 speaks directly to the Kansas situation: “The child shall enjoy special protection, and shall be given opportunities...to develop physically, mentally, morally, spiritually and socially...in conditions of freedom and dignity. In the enactment of laws for this purpose, the best interests of the child shall be the paramount consideration.”

Recently, our nation has demonstrated an infatuation with U.N directives on everything from climate protocols to gun control. Thus, our complete lapse as regards the U.N’s call for the “paramount consideration” of the “interests of the child” is telling.

In our wholesale stampede to claim a right TO a child, we have vacuously trampled on the rights OF a child, most especially the right OF a child to be treated as “gift”, and not a product.

And speaking of science fiction, the ability to forecast a person’s medical future, and even life-span, through the observance of genetic markers, was probably not even imagined in 1959, but is almost standard science today.

Such medical progress makes it all the more critical to protect the child’s right, “wherever possible”, to be “begotten” not “made”, “to be conceived, carried in the womb, brought into the world and brought up by his own parents”, AND NOT assembled with parts purchased off Craigslist.
Posted by Tim Rohr at Sunday, January 27, 2013
CRAIGSLIST CHILDREN
2013-01-27T13:45:00+10:00
Tim Rohr
Artificial Insemination|Reproductive Technologies|
Comments