THE STRANGE LIFE OF THE FOUR-HYMN-SANDWICH 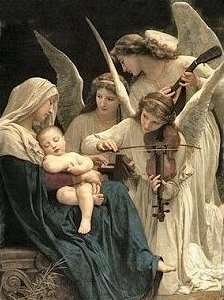 In this Year of Faith, which is also the fiftieth anniversary of the opening of the Second Vatican Council, the Holy Father has asked us to reflect especially on the texts “bequeathed to us by the Council”, to read them “correctly”, and take them to heart “as important and normative texts of the Magisterium, within the Church's Tradition.”

The first document to issue forth from the Council was Sacrosanctum Concilium: the Constitution on the Liturgy. A central issue addressed in this document was the role of sacred music, which the Council Fathers had declared to be “greater than any other art”.

The reason for the noble place of music as the highest of the arts is because sacred song embodies the sacred texts and, through music, elevates them to the highest possible human expression.

Thus the Council required that sacred song form an “integral part of the solemn liturgy”  and not merely ornament it. In other words sacred song was not to be “singing AT Mass”, but singing THE Mass! The Mass itself was the song.

As was the case with other Council documents, Sacrosanctum defined central principles but left the details of implementation to the appropriate administrations. In the case of liturgical music, this task fell to the Sacred Congregation of Rites which, in 1967, issued the instruction Musicam Sacram.

Musicam Sacram sought to implement exactly what the Council required: the integration of liturgy and sacred song and the elimination of the practice of merely ornamenting the liturgy, including the common use of what some church musicians called “the four-hymn-sandwich”.

The “sandwich”, the singing of hymns during the entrance, offertory, communion, and recessional, was a practice which grew out of the celebration of Low Mass in the Traditional Rite (Latin Mass).

As opposed to the High Mass, wherein all the audible parts of the Mass are sung, the Low Mass is only read. Ideally, every Mass, especially a Sunday Mass, should be a “Missa cantata”, a sung Mass. But since this was not always possible, a “Missa lecta”, or “read Mass”, was permitted.

And, as a way of sort of filling in the places in the Low Mass where “waiting” occurred (entrance, offertory, communion, exit), the singing of popular hymns during those “spaces” gradually came into practice. There was nothing wrong with this practice, but it was essentially a concession and not the ideal, the ideal being a sung Mass.

Recognizing the difficulty of doing a purely sung Mass on a regular basis and doing it well, the Sacred Congregation of Rites, in implementing the reforms called for by Sacrosanctum and looking to increase the “active participation” of the people, divided singing at Mass into three degrees which are as follows:

The following belong to the first degree: (a) In the entrance rites: the greeting of the priest together with the reply of the people; the prayer. (b) In the Liturgy of the Word: the acclamations at the Gospel. (c) In the Eucharistic Liturgy: the prayer over the offerings; the preface with its dialogue and the Sanctus; the final doxology of the Canon, the Lord's Prayer with its introduction and embolism; the Pax Domini; the prayer after the Communion; the formulas of dismissal.

The following belong to the second degree: (a) the Kyrie, Gloria and Agnus Dei; (b) the Creed; (c) the prayer of the faithful.

The following belong to the third degree: (a) the songs at the Entrance and Communion processions; (b) the songs after the Lesson or Epistle; (c) the Alleluia before the Gospel; (d) the song at the Offertory; (e) the readings of Sacred Scripture, unless it seems more suitable to proclaim them without singing.

The instruction notes that the “three degrees are so arranged that the first may be used even by itself, but the second and third, wholly or partially, may NEVER (emphasis mine) be used without the first. In this way the faithful will be continually led toward an ever greater participation in the singing.”

Note that the first degree, and thus the most important parts which are to be sung, are between priest and people, NOT the choir, or even the choir and the congregation. Note also that the singing of an entrance, offertory, and communion hymn is not allowed until the third degree. (The recessional is not considered part of the Mass.)

The whole dynamism of the instruction is oriented so that the celebrant is at the center of the liturgical drama (which he should be), and the people respond in song to him and not to the choir or to a song leader.  In other words, our church is saying to us: “We want the people to actively participate and THIS is how you do it.”

However, as most of us are aware, nearly fifty years later, the vision of the Council for the liturgical integration of sacred song is widely ignored. And what is served up at most Masses is still the pre-Vatican II “four-hymn-sandwich” with a meditation or two thrown in as a side.

Some celebrants may object that they do not have a good enough voice to sing the liturgy. Musicam Sacram anticipated this and advises the priest with doubtful musical abilities to simply chant the desired parts on a single tone, something almost anyone can do, and to which, almost anyone can respond.

Given that so much else has changed relative to the celebration of the liturgy, the strange survival of the “four-hymn-sandwich” not only makes for a puzzling pre-Vatican II leftover, but given the central role of sacred song accorded it by the Council, our disregard for this key reform is a kind of metaphor for the “do-it-yourself” implementation of the Council which has occasioned the “crisis” the Holy Father, in this Year of Faith, now feels compelled to engage.

While Vatican II proposes much that requires a greater expertise and understanding for its proper implementation, there is nothing hard or difficult to understand about the requirements for sacred music. In fact, they are incredibly and beautifully simple and easy to implement. Shall we begin? The people might even sing.