The study is in fact an admission that commonly available contraception is a failure and only surgical implants or physician-inserted devices are effective. Of course neither one of these methods protects from STD's which is the real epidemic.

The two methods used in the study were the IMPLANTABLE ROD and the IUD, both of which require a physician to insert, the ROD requiring surgery. And according to the FDA's own data, both pose big health dangers - a fact not included in the story. The following is from the the FDA booklet on birth control.

And How does (the IUD) work?

And so how does THINS THE LINING OF YOUR UTERUS prevent conception (which is what contraception is suppose to do)? It doesn't. It keeps your baby from finding a home and sends him or her down the toilet.
Posted by Tim Rohr at Saturday, October 06, 2012
FREE BIRTH CONTROL LEADS TO FEWER ABORTION - THE REST OF THE STORY
2012-10-06T05:32:00+10:00
Tim Rohr
Birth Control|Contraception|Contraceptive Mandate|
Comments 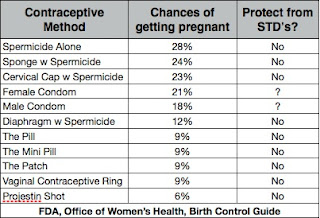