Random Thoughts on the Eve of 2012

The World Scene
Notwithstanding the eschatological predictions of the Mayan calendar, 2012 bodes ominously ahead, nonetheless. The battle for the office of the U.S. presidency promises to be one of the meanest fights ever. The North Korean situation is volcanically unstable and is ramping up to be a 21st century version of the Cuban Missile Crisis. Iran is apparently on a divine mission to pull its nuclear trigger and hasten the “end of days”. The U.S. supported “Arab Spring” is backfiring badly causing the world’s most volatile region to become even more volatile with Christian blood soaking the region anew. Europe is simply collapsing under the weight of a comically unsustainable economic model that the current U.S. administration seems determined to emulate. The planet’s most populous country and mighty crusher of human rights is poised to dominate the world both economically and militarily. And amidst all this, the U.S. “fiddles”.  Maybe the Mayans were on to something.

Supreme Decisions
The current ideological complexion of the nation’s highest court has probably never been more precariously balanced. Of the nine justices, four are dependably liberal, four are conservative, with the ninth, Anthony Kennedy, an unpredictable “swinger”. Two justices, Ginsburg and Breyer, solid liberals, are expected to retire during the next administration meaning whoever is president will choose their replacements.  An Obama presidency will simply give us more of the same while a Republican would likely weight the court to the “right”. With the re-definition of marriage and a challenge to Roe v. Wade possibly in the judicial offing, the 2012 presidential election is about much more than the economy, at least for those who still call themselves Catholic.

Impressive
There is a new Kingdom Hall (Jehovah Witness) being built just down the road from my home. From what I can tell the church members themselves are providing the labor. Women and men of all ages, shapes and sizes are out there in hard hats, setting forms, tying rebar, and pouring concrete. You can feel the enthusiasm for the project just driving by. It made me think of how Catholics once built their own churches and schools. Hmmm.

Courage
And speaking of enthusiasm, I was recently visited by three young members of the Church of Jesus Christ of Latter Day Saints. It was dark and my home is in a rural area. It is also quite a distance from the main road and they had to get by several man-eating dogs to get to me. Impressed with their courage, I spoke with the young man who was the apparent leader. He was from Utah, in his early twenties, was inspired by his older brother to go on a mission, and had been sent to Guam eight months ago. I am fairly skilled at engaging challenges to the Catholic Faith, but I have to say that I had to work hard at responding to the young man’s case for the Mormon religion. The encounter made me wonder what great things we could accomplish for our own Church if we prepared our youth to do what Mormon youth do.

Sunday Best
While waiting for my daughter to get something from the local market a few Sundays ago, I happened to see, across the street from where I was parked, a young family exit their car and prepare to enter the converted gas station that was their church. The man had on a coat and tie and the woman, a nice dress. Their little girl also wore a dress and the little boy, a coat and tie like his dad. From the looks of things, one could easily assume that the nice clothes they had on might have been the only nice clothes they owned. And while they may have had only an abandoned gas station in which to worship, they were, nevertheless, dressed to “see the King”. The contrast was disturbing. We Catholics, who worship in the finest buildings and receive the King Himself in the Flesh, often dress like we’re going to an abandoned gas station.

The Christmas Devil
We should not be surprised at the annual Christmas visit of the demonic triplets: Depression, Despair, and Despondency. The birth of Christ meant the beginning of the end of Satan’s dominion as Prince of the World. It is no surprise that the Evil One would want to ruin the annual party. We should expect the Father of Hate and Despair to exploit the gulf between our warm, worldly “Christmasy” expectations and the dark aloneness that inevitably haunts us as we grow older. Nevertheless, “let nothing you dismay.” Let us gird our loins, toast the end Satan’s power, and sing tidings of comfort and joy, comfort and joy!
Posted by Tim Rohr at Friday, December 30, 2011
Random Thoughts on the Eve of 2012
2011-12-30T06:13:00+10:00
Tim Rohr
Published Articles|
Comments

December 28: The Feast of the Holy Innocents 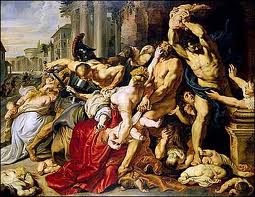 With terror doth the tyrant hear
The King of kings hath come to dwell
Where David’s court shall widely rear
A sceptered reign o’er Israel.

Then cries out, raging at the word:
“He comes to stand where we have stood:
Hence, soldier, and with ruthless sword
Deluge the cradles deep with blood!”

What profiteth a crime so dread?
What hope shall Herod’s bosom sway?
Alone amidst the thronging dead,
The Christ is safely born away!

You, tender flock of lambs, we sing,
First victims slain for Christ your King:
Beside the very altar, gay
With palms and crowns, ye seem to play.