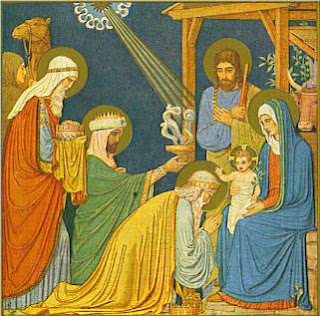 On the contrary the Holy Family accepted the gifts of the Magi as the rightful due of the King of Kings, and “since ever since” the faithful have endeavored to imitate the Magi in honoring our King with the best, the beautiful, and the expensive. Thus the glory of a St. Peter’s Basilica, the Cathedral at Notre Dame (France), New York’s St. Patrick’s, and our own Dulce Nombre de Maria Cathedral-Basilica. It is by Divine design that we move from straw to gold, from manger to throne, from catacomb to cathedral, and from carpenter to King. Now...about those Birkenstocks.
Posted by Tim Rohr at Friday, January 06, 2012
Jesus Gets a Visit from the 1%
2012-01-06T14:36:00+10:00
Tim Rohr
Christmas|Economics|Published Articles|The Magi|
Comments