A SIN OF SCANDAL 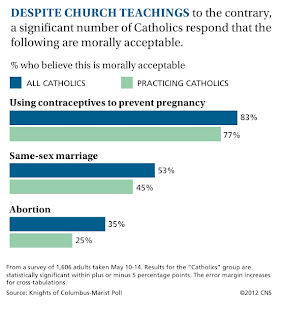 
The poll results should come as no surprise. Polling of Catholic opinion has been showing an increase in these numbers for several years. As a Catholic community we would do well to look at such numbers as a “report card”. Obviously something is terribly wrong. But what?


Presently, there is much at stake. Unless the Supreme Court dumps Obamacare, we are headed for a showdown with Federal Law as of August 1, the date the HHS mandate will force Catholic employers to provide contraceptive coverage for their employees.

The bishops are counting on rank and file Catholics to rally to their cause in the name of Religious Freedom. But, as you can see, most Catholics have a different idea of religious freedom: freedom from the Church’s moral teaching! But where did we get such an idea?

Perhaps the key to understanding the disconnect can be found in an analysis of why it is that most Catholics do not see a dichotomy between holding views in direct conflict with Catholic Teaching and being “good Catholics”.

After all, we see big-name Catholics such as the late Ted Kennedy, Nancy Pelosi, John Kerry, and Joe Biden - all of whom have taken public stands contrary to Catholic moral teaching, not only persist in their errors without episcopal reprimand, but continue to receive Communion and even accorded positions of honor at Catholic events and institutions. It’s only natural that the “rest of us Catholics” would believe it’s okay for us to do the same.

However, such deference to those who promote the legislation of sin is a sin itself, the  Sin of Scandal. And according to the Catechism...it’s a Mortal Sin: “Scandal is an attitude or behavior which leads another to do evil. The person who gives scandal becomes his neighbor's tempter. He damages virtue and integrity; he may even draw his brother into spiritual death. Scandal is a grave offense if by deed or omission another is deliberately led into a grave offense.” (CCC2284)

Contraceptive acts, homosexual acts (assumed in same-sex marriage) and abortion are defined by the Catechism as grave evil. And there is no question that the leniency and privilege shown the likes of Kennedy, Pelosi, and Biden, have led to the general acceptance of grave evils as “morally acceptable” by the general Catholic population.

A case in point is the contest between former speaker Pelosi and her Archbishop. Pelosi is a classic case of “Catholic girl gone wild”. She has gone beyond just being on the opposite side of Catholic moral teaching, she has erroneously (and comically) employed Catholic theology to substantiate her positions.

Archbishop Wuerl of Washington D.C., where Pelosi also lives, has not only NOT engaged her erroneous views, he has declared that he will NOT deny her Communion and even referred to appeals to deny her Communion a “distraction” from the “progress” he feels he is making in “conveying the pro-life message to the Democratic party” (which declares its support for abortion in its national platform.)

Advocates for the denial of Communion to pro-abortion politicians point to Canon 915 which states that those “who obstinately persist in manifest grave sin, are not to be admitted to holy communion.”

Pope Benedict further clarified the application of this canon when he advised in 2004 that when a “person’s formal cooperation (with abortion) becomes manifest” (public) “his Pastor should meet with him, instructing him about the Church’s teaching, informing him that he is not to present himself for Holy Communion until he brings to an end the objective situation of sin, and warning him that he will otherwise be denied the Eucharist.”

More recently, Archbishop Raymond Burke, Prefect for the Apostolic Signatura (the highest legal authority in the Church) stated: There’s not a question that a Catholic who publicly, and after admonition, supports pro-abortion legislation is not to receive Holy Communion and is not to be given Holy Communion.”

Bishops like Wuerl have been seen as progressive and even charitable in their leniency. Maybe so, but now “the chickens have come home to roost”. Pelosi, more than anyone in Congress, is responsible for the passage of Obamacare and the evil mandate that these same bishops are now asking us to oppose.