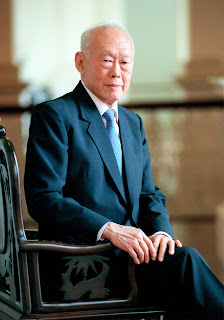 “We've got to persuade people to understand that getting married is important, having children is important.” The words of a conservative Catholic cleric? Some right-wing, pro-life radical? Nope. Those are the words of Lee Kuan Yew, the Prime Minister and Founder of Singapore.
Appearing recently on Singapore TV, the 88 year-old Yew was not giving a lecture in defense of the family, he was decrying the death of the nation he himself had founded. Singapore may have one of the world’s highest standards of living, but it also has the world’s lowest fertility-rate and its population is dramatically imploding.


The fertility-rate is the number of children a woman will have over her lifetime. The minimum necessary for a society to replace itself is 2.1: one for her, one for her mate, and 0.1 to account for infant mortality. Singapore is at 0.75 and the rate has been declining since the 70’s after Yew himself instituted a policy called “Stop at Two” which paid women to get sterilized.

Because Singapore is a small nation, it didn’t take long for the fertility reduction policy to manifest its effects. At first, it had the desired effect: a reduction in the number of child dependents freed up labor for Singapore’s economic machine. In fact, the economic turnabout was so quick that Singapore became known as the “Asian miracle”.

With few dependents and lots of capital, Singapore’s standard of living soared. But by 1980, Singapore was forced to begin importing migrant labor to keep its economic engine going. There simply were not enough young Singaporese. Yew’s fertility reduction policy had worked well, too well.

In 1980, Yew dropped his “Stop at Two” policy and replaced it with “Three or More”, which, instead of paying women to get sterilized, paid them to have babies. But, as Yew’s recent plea seems to evince, it hasn’t worked. As one commentator put it: the Singaporese seemed to have “acquired a taste for small families and shopping.”

Near tears, Yew further implored his people: "If we go on like that, this place will fold up, because there'll be no original citizens left to form the majority...Do we want to replace ourselves or do we want to shrink and get older and be replaced by migrants...?"

Though the desire to maintain political control through an ethnic majority seems to be at the root of Yew’s comments, the larger issue at some point for the aging Singaporese is simply going to be the need to have someone around to help them get to and from the toilet.

Singapore isn’t alone. A 2007 U.N report noted that the fertility rate is plunging in almost every country in the world (except for a few in sub-Saharan Africa), and warned of the effects of a “graying world” on the world’s health care systems. According to the report, the crisis point for each nation is when the over-65 population surpasses the under-5 population.

One demographer calls it “Solving for X”, X being the point at which the lines representing the two population sectors cross on a graph, foretelling a point, perhaps a generation hence, when there will simply be “too many old people.” Perhaps, this is why many countries whose populations have already reached “X”, particularly in Europe, have begun liberating their euthanasia laws.

“Solving for X” is at the root of the debate over America’s “safety-net” entitlements: Medicare and Social Security. These programs depend on taxing the incomes of the current working generation to pay for the care of retirees. In 1940, when Social Security was instituted, there were 42 workers per retiree. Today there are 2.8.

Recently, Paul Ryan created a stir over his plan to fix Medicare, which is endangered by the collapse of this worker to retiree ratio. His detractors have claimed that Ryan want to “throw Granny over the cliff”. However, the math is clear, Granny is already headed for the cliff, and you, right behind her.

Ironically, our “safety-net” crisis has been wrought by the very generation that will probably suffer most from its collapse. Like the people of Singapore, our own society has “acquired a taste for small families and shopping, not to mention the 50-80 million missing people due to the 2.7 unborn children we have aborted every minute of every day since January 27, 1973 (Roe v Wade).

Amazingly, in the midst of this crisis, President Obama has instituted an anti-fertility policy (HHS Mandate) which will hasten the collapse of the worker to retiree ratio, assuring the destruction of the social-safety net programs he pretends to champion, and setting us on a course for the economic and national melt-down which inevitably follows population implosion. Perhaps he should speak with Mr. Yew.

A REASON TO WAIL AND GNASH OUR TEETH

The “pregnancy is rare in rape” comment made by senatorial candidate, Todd Akin, has produced a firestorm of criticism from all sectors. But no one seems to have addressed the question which provoked the comment in the first place: would Akin accept an abortion exception in cases of rape and incest?

Akin actually went on to answer the question after his ill-fated rape comment, and answered it well, saying essentially he believed the rapist should be punished and not the child. In other words, “Why kill the baby?”

The conversation didn’t “go there” because the abortion-mad media hounds already had the bone they were sniffing for in Akin’s comment on the alleged rarity of pregnancy in instances of “legitimate rape”, but we can “go there” now.

The question of an exception for abortion in cases of rape or incest particularly concerns Catholics since the Catholic Church is quite alone in holding that procured abortion is “intrinsic evil” - meaning never justified under any circumstances.

In other words, direct abortion is never licit, not only in cases of rape or incest, but even to save the life of the mother - a hard reality that was recently concretized in the canonization of St. Gianna Molla, who chose her own death rather than her unborn child’s.

However, the firm reality of this teaching is usually in conflict with most pro-life legislative efforts which often allow for a rape and incest exception in order to avoid constitutional challenges.

John Paul II addresses this conflict in Par. 73 of Evangelium Vitae. In recognizing circumstances  “when it is not possible to overturn or completely abrogate a pro-abortion law”, the Pope says it is still licit to attempt to limit the evil effects of an unjust law even though the attempt itself might necessitate the toleration of some evil aspects (such as the rape exception).

The Pope’s teaching is rooted in the moral principle of “the lesser of two evils”, one of the four basic moral principles which help us navigate morally complex issues where cooperation with evil in some degree is unavoidable (the others being the principle of double effect, tolerance, and compromise).

Choosing between “the lesser of two evils” is a common Christian dilemma in the political arena. There is rarely a perfect candidate or a perfect bill. But we still have a duty to the “Kingdom of God on earth”, when perfection is not one of the options, to vote for that which will do the “least harm”.

The presidential race presents a textbook case for the application of this principle. It’s no mystery that the Obama-Biden ticket is radically committed to abortion “rights”. Romney and Ryan are staunchly pro-life, but Romney would support an exception for rape and incest, making his position less that perfect relative to Catholic moral principles.

Obviously the Romney-Ryan ticket is “the lesser of two evils” on an issue that deals with no ordinary evil, but an intrinsic evil. However, expecting Catholics to choose the lesser of two evils in this instance assumes that Catholics actually care about abortion and recent polls show that they do not: Pew Research reported in July that 51% of Catholics believe that Obama-Biden best represents their views on abortion and only 36% chose Romney-Ryan.

Amazingly, while Catholic support of abortion escalates, the rest of the nation is seeing the exact reverse. A recent CNN poll now shows that 62% of Americans believe abortion  should be illegal in all but the most extreme cases, and only 35% want abortion for any reason.

So while we can rejoice that America is waking up to the ugliness and damage of abortion, the increasing Catholic support for abortion is an occasion for much wailing and gnashing of teeth (and perhaps a good examination of conscience).

And the problem isn’t just “over there”. Though we have no polling on the issue, we can assume the same percentages for Guam. Guam Medical Records reports that 55% of abortions since 2008 have been procured by Chamorros, most of whom, we can assume, are Catholics, or at least come from Catholic families.

Plus, Guam continues to play host to the least regulated abortion industry in the nation,  a sad reality which continues due to the refusal of the legislature to pass the most basic life-protecting bills such as Bill 309-30, which would have mandated normal medical care for a child who survives a failed abortion. The bill ended up in the trash just like the gasping, writhing babies it would have otherwise protected.

Posted by Tim Rohr at Sunday, September 02, 2012
A REASON TO WAIL AND GNASH OUR TEETH
2012-09-02T06:51:00+10:00
Tim Rohr
Abortion|Abortion and Rape|Abortion on Guam|Obama|Politics|Pregnancy in Rape|The Politics of Abortion|Todd Akin Affair|
Comments