DID THE POPE JUST PERMIT CONTRACEPTION? 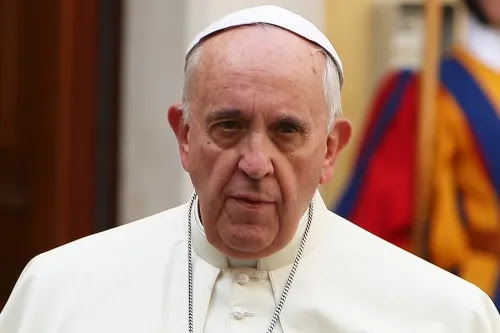 Once again, the Catholic media is scrambling to unscramble what the pope said. Once again, the controversy originates from remarks by the pope on a plane returning to Rome. And this time the issue is contraception.

A quick "google" of the words "pope" and "contraception" turns up:

Pope Suggests Contraception Use May Be 'Lesser Evil' For ...
NPR - 5 hours ago

Pope suggests contraception can be condoned in Zika crisis ...
The Guardian - 2 hours ago

Pope Francis Says Contraception Can Be Acceptable in ...
The Wall Street Journal - 6 hours ago

Pope Francis Says Contraception May Be 'Lesser of Two Evils'
abcnews.go.com/ - 7 hours ago

Is Pope Francis' Contraception Allowance During Zika ...
NBCNews.com - 3 hours ago

So now we are in for another round of the Catholic media blaming the secular media for taking the pope's remarks out of context, etc., etc., etc...

So let's go to exactly what the pope said as reported by the Catholic News Agency:

Paloma García Ovejero, Cadena COPE (Spain): Holy Father, for several weeks there’s been a lot of concern in many Latin American countries but also in Europe regarding the Zika virus. The greatest risk would be for pregnant women. There is anguish. Some authorities have proposed abortion, or else to avoiding pregnancy. As regards avoiding pregnancy, on this issue, can the Church take into consideration the concept of “the lesser of two evils?”

Pope Francis: Abortion is not the lesser of two evils. It is a crime. It is to throw someone out in order to save another. That’s what the Mafia does. It is a crime, an absolute evil. On the ‘lesser evil,’ avoiding pregnancy, we are speaking in terms of the conflict between the fifth and sixth commandment. Paul VI, a great man, in a difficult situation in Africa, permitted nuns to use contraceptives in cases of rape.

Don’t confuse the evil of avoiding pregnancy by itself, with abortion. Abortion is not a theological problem, it is a human problem, it is a medical problem. You kill one person to save another, in the best case scenario. Or to live comfortably, no?  It’s against the Hippocratic oaths doctors must take. It is an evil in and of itself, but it is not a religious evil in the beginning, no, it’s a human evil. Then obviously, as with every human evil, each killing is condemned.

On the other hand, avoiding pregnancy is not an absolute evil. In certain cases, as in this one, such as the one I mentioned of Blessed Paul VI, it was clear. I would also urge doctors to do their utmost to find vaccines against these two mosquitoes that carry this disease. This needs to be worked on.

First, the pope completely mishears the question and thus inappropriately responds. The reporter DOES NOT call abortion "the lesser of two evils," his reference is to "contraception: "As regards avoiding pregnancy, on this issue, can the Church take into consideration the concept of “the lesser of two evils?”

Next, it is sad that the pope compares abortion to "what the Mafia does." The Mafia may kill people, but there is nothing to compare to the direct killing of a victim who is as helpless and innocent as an unborn child. Equating abortion with the Mafia knocking off people who get in their way radically devalues the Catholic teaching that there are different degrees of sin. Obviously the killing of an unborn child, unable to scream or run, is grossly more serious than the mob knocking off a drug dealer for blowing a deal. But now, according to Pope Francis, it is not. This is very dangerous and such a comparison gravely undermines the effort to bring attention to the dignity and innocence of the unborn child.

Next, Pope Francis appears to pit God against God: "we are speaking in terms of the conflict between the fifth and sixth commandment." There is no conflict in God, least of all in God's law. But yet, this is how Pope Francis frames it: apparently, because of the latest health issue to affect humanity, even though it is yet a tiny portion, somehow we must choose between the fifth and the sixth commandment. HUH? The fifth commandment is "Thou shalt not kill (murder)." And the sixth is "Thou shalt not commit adultery." There is no conflict. Both are mortal sins.

Next he references the case of Paul VI and the nuns in the Congo: "Paul VI, a great man, in a difficult situation in Africa, permitted nuns to use contraceptives in cases of rape." Sadly, no one was talking about rape here. The reporter's reference was to the potential for birth defects precipitated by a mother's exposure to the Zika virus. Anyone can see that the reporter was not speaking of unwanted pregnancies, let alone those brought on by rape. Yet the pope uses this extreme example permitted to nuns in an extreme situation.

However, here is where Francis either makes a huge error or permits a real slip of an agenda many are beginning to suspect. Let's talk about the error first.

According to the Catholic News Agency, the "nuns in the Congo" issue occurred in the early 1960's. Due to the very high danger of being raped and impregnated, Paul VI was reported to have permitted nuns to use oral contraception. Since the permission was said to have been given in "the early 1960's," and Paul VI became Pope in 1963. We can guess that this occurred between 1963 and 1965, right at the same time he expanded "The Pontifical Commission on Birth Control."

Yet, Francis uses Paul VI's very narrow permit, employed specifically by a specific group of women (nuns) who were ministering in a severely dangerous situation, and a permission granted at a time when the immoral use of oral contraceptives had not yet been magisterially defined, as a model for the use of contraception generally when there is a potential of viral harm to the fetus.

This was either an absolute misreading of the historical context, or Francis has let slip his desire to liberate the Church from that which he is not authorized to liberate.

Next, I really don't know what he is doing appealing to the Hippocratic Oath at this point. It appears that he is trying to separate religion from the world, which of course would make his liberal press friends happy. This is really obvious when he says: "Abortion is not a theological problem, it is a human problem, it is a medical problem." Really? Somehow, human problems and medical problems, are not the concern of theology? Personally, I think I know the finer point of what the pope is trying to say, but on its face, the pope's comment just gave justification to the liberal's calls to "keep your religion out of my life."

Then he ends the second paragraph with more confusing moral relativism: "Then obviously, as with every human evil, each killing is condemned." This is not true. The Church has ALWAYS permitted the killing of another human being in self-defense. This underlying moral principle extends to the doctrine of Just War, and is even the main reason why the Church has never and can never completely condemn capital punishment. However, the real problem with this comment is that the pope once again devalues the helplessness and innocence of life in the womb by equating the killing of the unborn child with all killing.

Then there is his saying: "avoiding pregnancy is not an absolute evil." This statement could be true. There is nothing evil about not engaging in sex and thereby "avoiding pregnancy." However, the Catechism of the Catholic Church - which elsewhere in the report Francis says he supports - defines
"every action which, whether in anticipation of the conjugal act, or in its accomplishment, or in the development of its natural consequences, proposes, whether as an end or as a means, to render procreation impossible" is intrinsically evil..." (CCC 2370)

I personally do not think (yet) that the pope is intending mischief. I think he simply talks too much and without much thinking. At least I hope that's the case. We shall see.