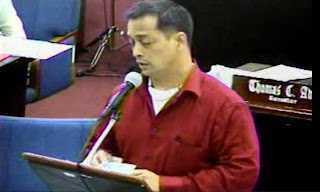 Email ThisBlogThis!Share to TwitterShare to FacebookShare to Pinterest
Labels: Abortion, Abortion on Guam, The Politics of Abortion

This is a response to just a few of the things Cardinal Dolan said in his interview on FACE THE NATION with Bob Schieffer on April 8, 2012. 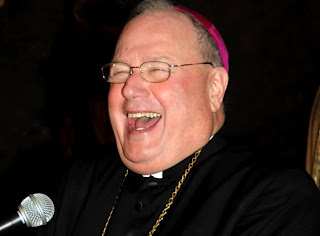 Forgive me, but I find Archbishop Dolan absolutely frightening, in fact, because he dresses in red, a much more dangerous man that the President.

DOLAN: “I think religion is vibrant. It's growing, the stats show us...”

ME: This is an example of why our Church is in trouble: this mad infatuation with the “positive” that just isn’t there instead of dealing with the very ugly reality that has been gnawing away the innards of our Church for the last five decades. A 2012 CARA poll shows Dolan’s “vibrant” growth is an increase of 1% of those who attend Mass at least once a week over the last 7 years: 2005 = 23%, 2012 = 24%. And 24% in itself is a scandal.

ME: This one REALLY SCARES ME. Kennedy? Morals? WTH? And then he says that Kennedy didn’t mean to say what he did?? Is there anything in the history of any of the Kennedy’s, then or now, that shows that JFK did not mean precisely what he said. Then he goes on to throw Santorum - the only Catholic in the room - under the bus. ABSOLUTELY FRIGHTENING!

DOLAN: “...although I appreciate very much the Vice President. He has been helpful and I-- I-- I have benefitted from his counsel and I look forward to talking to him again.

ME: OMG! OMG! OMG! HOUSTON WE HAVE A PROBLEM - no further comment.

DOLAN: I am a little confused, because the President told me his convict--- his position, his conviction is that the government would do nothing to impede religion. And he-- he was very gracious, and especially complimenting the Catholic family.

ME: UMMMMMMMMMM. GEEZ! Can anyone say “Neville Chamberlain”?

SHIEFFER: “...new Pew poll out that says sixty percent of Catholics say that churches and other houses of worship should just totally steer clear of politics.
DOLAN: Yeah. I do worry about that, Bob.

ME: Total contradiction to his belief in a vibrant, growing Church. (BTW, a Kaiser Family poll shows that the same % of Catholics support Obama’s mandate.)

DOLAN: You've got a dramatic, radical intrusion of a government bureaucracy into the internal life of the church that bothers me. So hear me say, hey, I'd like to back away from this, I got other things to worry about and bigger fish to fry than this.

ME: Dolan says it “bothers me”. Two problems. It’s not about him, and NEWS FLASH, this is a little bit bigger than a “bother”! And he’d “like to back away”. Yes, Cardinal, the President knows that, which is why he is riding you out on this. And you have “bigger fish to fry”? Yes, that’s because you only see this as a religious freedom issue and not the result of the radical rejection of Humanae Vitae for the past 40 plus years, a rejection strategically designed by your predecessor Bernardin and dutifully carried forward over the decades by your colleagues (save for a few).

DOLAN: “I said there-- there may be reasons not to vote for Mitt Romney as President of the United States that he is a Mormon cannot be one of them.”

ME: At first I thought that this comment was praiseworthy. But upon another look, it is consistent with his other dangerous statements. We have before us two candidates: one, imperfect, the other, perfect. Obama is perfect, perfectly aligned with the Culture of Death. There has never been a president or a candidate with as perfect a pro-abortion rating as Barack Obama. He has 100% across the board. He even beats Hillary Clinton and Ted Kennedy who at least supported the Born Alive Act (the only pro-life credits to their names). For a Catholic, especially Dolan, there are NO reasons not to vote for Mitt Romney given the alternative (of course that presupposes that you even know or care about the moral gravity of abortion - something the Cardinal seems loath to illustrate given the confused, meandering, squeamish, and vacuous documents - life Faithful Citizenship - that emanate from his office.)

And BTW, Dolan says the contraception debate is not over. This an interview from April 2012. The mandate went into effect on August 1. Most groups have renewed their insurance coverage by now which means that most of America is now under the mandate and paying for abortifacients. Have you heard any protest from Dolan or anyone else since? Are any hospitals or schools closing as threatened? As far as I know, the Archdiocese of Guam is the only diocese in America that has told Obama to screw himself. We have claimed the religious exemption for all of our institutions and told the government to come and get us - prove that we do not exist to inculcate Catholic values, prove that we do not “primarily” employ and serve those who subscribe to our religious tenets. Of course we serve everyone of all faiths or no faith, but a religious test is unconstitutional and we know we would win if the government ever tried to administer one. BTW, guess whose idea it was?

Other articles on the Danger of Dolan: