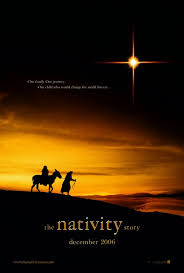 Mel Gibson’s THE PASSION OF THE CHRIST and New Line Cinema’s THE NATIVITY STORY both cost about the same amount to produce (35 million). The PASSION grossed 80 million it’s first weekend, NATIVITY grossed 8 million. Gibson’s film went on to gross about 370 million in North America alone. The NATIVITY is limping to a close at a less than break-even 25 million.

It’s extremely entertaining to see how the Christian press is handling this “bad” news. Everything from snow storms to Mel Gibson is being blamed. (Mel’s not being blamed directly but not having a name like Gibson’s attached to the movie was seen as one of the causes for the movies poor showing. See Christian Movie News - What’s up with The Nativity?)

It’s not like God fearing, Bible waving Christians are overwhelmed these days with choices at the theater. So “Whither the Nativity Crowd?” asks ChristianityToday.com.

One of the sadder comments appeared in The Catholic Register:

“We’re disappointed that it has not made it big at the box offices,” said Sister Mary Peter Martin, FSP, of Pauline Books and Media Centre in Toronto. “This is the first time since the 1950s that a large company in Hollywood has put on a major Bible-based Hollywood story.”

Sister Martin said she worries these types of films won’t continue if Catholics don’t support them.

First it reveals an ignorance of how markets work; something the Pauline sisters should be well aware of since they are in the business of making and marketing media materials (http://www.pauline.org/).

Economics Lesson Number One is that folks buy stuff because of the value of the stuff itself. Ideology, propaganda, advertising, and whatever external forces one can exert will only carry a product so far. Ultimately the “thing” must be capable of “selling itself” to the end user or the market will kiss it good bye. Though some will always support a thing because of the cause it represents, consumers in the main do not support or buy that which does not return value for value.

It would be more instructive for Sister Martin to contemplate the reasons why this movie is not selling rather than bemoan the lack of support from Catholics, especially since it seems that her company is investing in a big way into related "Nativity Story" products (DVD’s, study guides, pamphlets, etc.)

The other thing that amazes me is the Pauline’s gun-ho promotion of the movie without regard to the very serious affront to the person of Mother of God that the movie presents. And I’m not just talking about the afore-discussed issue of Mary’s labor pains. (See my blog – The Problem with THE NATIVITY STORY)

"Taken as a whole, tradition indicates a most exalted view of Our Lady, who was preserved from both Original sin and its effects, including even the slightest inclination to sin. Off hand, I can not think of a single saintly spiritual writer who would suggest that the Immaculate Conception went through a rebellious period during Her teen years. However, this is precisely the way in which filmmakers portrayed Our Lady.”

He continues:
"As I point out in my review, Hardwicke (the director), a Presbyterian, was interested in writing a growing up story, i.e., one about transformation through the rebellious teen years. She was chosen for the job precisely because, when it comes to portraying the crises that teens experience when growing up, especially girls, She is an expert filmmaker (see my review).

One may argue about what an artistic representation conveys in regard to the psychological experience or moral responsibility of a character, but the Mary of The Nativity Story compares very poorly with the tradition. Find me a saint that meditated on Our Lady after the manner of Hardwicke. There aren’t any. The result of viewing this movie will not be a clarifying one for Catholics in regard to the Church’s praise and veneration of the Mother of God (emphasis added).”

Leaving aside these deeper issues I also think that the movie hasn’t done well simply because the girl who played Mary is pregnant by her 19 year old boyfriend. Sorry, yes it’s only a movie, but we plain folks really do like to believe that Silvester Stallone is not really Silvester Stallone, but Rocky Balboa and that he really did beat Apollo Creed. And who didn’t want Superman to really be Superman, and Spiderman, and… You get the idea. We want our heroes to be real.

Go ahead and call us names but you won’t get our dollars. I’m not alone in thinking this. There have been several blog entries like these:

“I can tell you what lessens my interest in Nativity: the news that the actress
who portrays Mary has become pregnant by her boyfriend. I am embarrassed to see
Nativity and tout it as a fine Christian film, since I know the actress is a
fornicator. I suspect I'm not the only one with this opinion.” -Ronald Jones

“A young, unmarried pregnant actress playing Mary was enough to turn me off this
movie.” -Jim Foulkes

But now for the real reason a la Tim Rohr. I think the movie has not done well because Jesus Christ through the power of the Holy Spirit is quietly protecting His Mother. Like a knight in shining armor going to battle to protect the unsullied integrity of his maiden, Jesus is guarding the dignity of His Mother in all aspects of who she was and is.

Ultimately it is our salvation that He is after, for there is no salvation without Christ, and there is no Christ without Mary. She, the Immaculate Conception, the Ever-Virgin, the Theotokos, the Queen of Heaven… SHE…is the GREAT SIGN. And ultimately the movie fails because its creators do not recognize her as such.