The following is my article which was printed in the June 26, 2011 issue of the "Umatuna", the newspaper of the Archdiocese of Agana. It can be read in entirety here. "Ite Missa Est" will be the title of a weekly column I will write regarding living the Faith beyond the church doors. 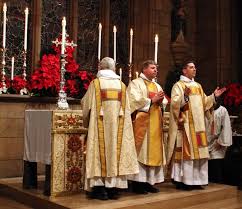 “Sunday Catholics.” It’s a common accusation leveled at some who seem to pay little heed to their faith outside of Sunday Mass. Certainly, only God can judge the heart, but the allegation still resonates.
There are many reasons why one might neglect his or her faith during the week, but perhaps one reason could be simply a translation problem.  At the end of the Mass, we are told  “The Mass is ended, go in peace.” There’s something about that word “ended”, you know, like, “We’re done for this Sunday...out a here...let’s go to brunch””, and so on.


Sometimes we hear “Go in peace to love and serve the Lord.” That’s perhaps a little more of an encouragement to continue one’s faith life beyond the church doors (“serve the Lord”), but it still feels like “Have a good week and see you next Sunday”.

The Latin text from which these dismissal phrases derive is “Ite, missa est”, which literally translates: “Go, sent is.” Hmmm. “Go, sent is”. What to make of this? The Catholic Dictionary tells us that “Ite, missa est” is “one of the most ancient Roman formulae, as can be seen by its archaic and difficult expression”, and notes that even medieval commentators were “much exercised to explain the meaning of the strange expression.”


Modern translators seem to have been just as “much exercised” since they settled for a transliteration rather than a strict translation. But even as a transliteration, or a paraphrase, it still must have missed the mark because a new translation of these words is forthcoming in the Roman Missal Third Edition (coming this Advent).
The word “missa” (sent) seems to be the key. A closer transliteration would be “Go, you are sent”, or “Go, this is your mission”. That the versicle doesn’t have the extra words to flesh out the instruction is probably due to a very early and natural shortening of the phrase - of which the rest of the words would have been known for anyone who heard it: a sort of “see ya then” instead of “I will see you tomorrow at ten o’clock in the morning”.
So why all the wrestling with the phrase? Because herein lies our marching orders for the rest of the week. Far from being ended, our mission, at Mass end, has just begun. We are sent, not just dismissed. At Mass we have been nourished and fortified by the Word of God proclaimed and the Word of God made flesh. You might say, we just had our breakfast of champions and now its time to go out there and score a few points for the team. It’s a sort of “GO, GET ‘EM!”
One might imagine how in the early days of Christianity, the words “Ite, missa est” meant a little more to those who were about to be dragged into an arena and eaten than for those of us today for whom those words mean only “We’re done, let’s eat.”
But of course, they don’t mean that. In the Mass, heaven is made manifest. And at the words “Go, sent is”, we are to go and make heaven manifest to the world, “sanctify the temporal order”, bring Christ to the public square, that sort of thing. Thus the title of this weekly column, which will focus on our responsibilities beyond the church doors, will be titled “ITE, MISSA EST”, for herein lies our command and our “mission possible”.
Posted by Tim Rohr at Saturday, June 25, 2011