Fr. Eric's Commentary on the Mass for the Feast of the Immaculate Conception 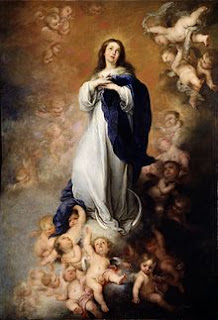 ADVENT AND MARY : The Church places two major Marian feasts in the two preparatory/penitential seasons of Advent and Lent; Immaculate Conception during Advent and the Annunciation during Lent.  This is to remind us of the link between the Savior and the Mother who brought Him into the world.  Mary serves as the "guarantor," as it were, of our Lord's earthly and human dimensions.  The Son of God truly, historically, became :one of us" to save us.  Mary also serves as the best example of a human soul surrendering itself to the divine invitation.  She teaches us to wait, look for, hope, prepare, pray, surrender.  "I am the handmaid of the Lord.  Let it be done to me according to your word."

THEME : GOD PREPARES HIS OWN HOME ON EARTH
God and sin are incompatible.  God cannot take His human nature from a mother who, even for a single instant, was under the rule of sin, so that the devil can never say that the Messiah came from a mother who was under his yoke even for a moment.  Jesus comes to overthrow the yoke of Satan, and He did it first by preserving His mother from the sin of Adam and Eve (Original Sin) from the first moment of her conception in the womb of Saint Anne.  He did this in view of the salvation He won for us on the cross.  Mary's immaculate conception is the first blow against the reign of Satan.  This first victory tells us that we, too, can overthrow the rule of Satan in our lives; not beginning at our conception, but after.
We cannot begin our lives like Mary, but we can end our lives like Mary.

INTROIT : It is Mary who speaks here, like a victory hymn!  But it is the victory of a woman; a human being - someone like us!  God saved Mary in a unique way, but that means He can save us, too, in a different way.  Mary has been clothed with a robe of salvation; God did not allow the sin of Adam and Eve to touch her at the moment on her conception.  Free of all sin, Mary is clothed in holiness, righteousness and justice.  She is to God what He originally intended mankind to be - His children, who know, love and serve Him completely, with no rebellion or sin.  In order for Mary to become the Mother of the Son, the Daughter of the Father had to become the Spouse of the Holy Ghost.  She is a bride, wedded to the Holy Ghost who overshadows her and through whom she conceives God the Son.  Husbands give their brides jewels, to show her how precious she is, worth all those jewels and more. Jewels represent the beauty of the bride.   Mary's jewel is her sinlessness.  But the newly baptized are also clothed with a mantle of salvation; they become spotless the moment they are washed clean in baptism, and are given a white garment as a sign of that.  When we confess our sins and are absolved by the priest, we wash that white garment that has been stained by personal sin.  Mary's immaculate conception robs the devil of his ability to rejoice over Mary's conception.  With the rest of us, the devil smiles as he sees each of us conceived in Original Sin.  In Mary's conception, the devil shudders with fear because he sees his power over mankind crumble for the first time. 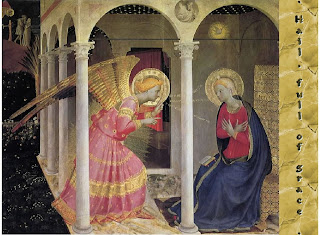 COLLECT : The Collect beautifully summarizes the doctrine of this feast.  It makes clear that the Immaculate Conception is God's work ("O God...didst make her").  It also makes clear that God's intervention was necessary ("didst preserve her"), otherwise Mary would have been conceived in Original Sin like everybody else.  God saved Mary in a unique way; we ask that He save us in the way marked out for the rest of humanity.  Both her salvation (preservation from sin), and our salvation (forgiveness of sin) are due to the blood of Christ.

EPISTLE : This passage from Wisdom is about God the Son; He is God's wisdom, His word (logos).  The Father made all things in His wisdom; therefore, He made all things through the Son, who is His wisdom.  But this passage also refers to Mary, the Mother of the Son.  From all eternity, God knew He would send His Son, His word - to redeem from sin what He had created in original justice.  From all eternity, God knew that this Son would need an earthy mother who would bring Him into the world and give Him His human nature and flesh.  Thus we can say that Mary was always in God's mind, from all eternity, and that He was with her from all eternity.  God delights in being with His children; He delights in being made man through Christ's Incarnation; He delights in being the Son of Mary and the Spouse of Mary.  At the end of the passage, we see Mary as the model : watching at the gates, waiting at the door.  It speaks of Mary's holy childhood, as a maiden in the Temple, praying and serving.  It is Advent; we are also to watch and pray.

GRADUAL / ALLELUIA : Here it is God who speaks, through His angel!  The angel tells Mary : Blessed are you!  Holy and heroic women of the Old Testament (like Judith, from which the Alleluia verse is taken) foreshadow God's most heroic woman, Mary.  Judith, a mere woman, beheaded the mighty general Holophernes; Mary, a most humble woman, defeats Satan.  She is the glory of our human race, and she makes possible our own salvation and future glory.

GOSPEL : A short passage, but gets right to the point.  God decisively enters human history; we can name the place, the people and their tribe.  In Luke's Gospel, we can also name the period in history.  Mary is full of grace.  The English translation limps, when compared to the original Greek.  In the Greek, Mary is continuously replete with grace, saturated, dripping with God's favor; in the past, even now and into the future.  She is so full of grace, that there is no room for anything contrary to grace.  It is God's goodness that has been poured into her.  When we honor Mary, we honor God who made her and who made her sinless.

OFFERTORY : The words of the Offertory are familiar and repeated.  But we make them here at the time when we offer bread and wine to God at Mass.  Our poor offerings pale in comparison to Mary, who is sinless and pure.  But we sinful people make our offerings in union with Christ and Mary; they make our gifts acceptable to God.

SECRET : I point out in the Secret a reference to a lesser-known teaching about Mary's virginity; that it is a perpetual virginity.  We mean to say here that Mary remained physically intact and virginal not only before and after giving birth to Jesus (ante partum/post partum) but also during birth (in partu).  See paragraph 499 of the Catechism of the Catholic Church.  The Secret states that Mary gave birth to Christ, without losing the glory of her virginity.

POST-COMMUNION : We start out in life differently from Mary; we are conceived wounded by Original Sin.  Mary was conceived in perfect human condition as God intended man to be.  But we can end our life as Mary ended hers; to die in the State of Grace, as she was full of grace.

BRETHREN - again a reminder.  Make the Missal your best friend.  Read it, pray it, reflect on it.  Let the LITURGY FORM YOU, mold you into a saint.
Posted by Tim Rohr at Wednesday, December 07, 2011