The Royal Wedding and the Thing Itself 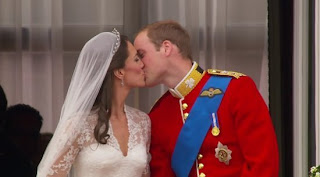 The Royal Wedding - I didn't catch it all. Caught a rerun about the time the homily was given. Wasn't going to bother watching. We only get 3 channels in Guam (via antenna). Was going to turn to PBS for Saturday morning cartoons for my kids. Decided to give the remote a random punch just to see if the Royal deal was on. It was. Figured it would be worth a few moments just for the spectacle.


Probably like most, I was immediately taken by the couple themselves. Not sure why. The bride was pretty enough. The groom in his military dress. All very fine. But the innocence... or at least the perceived innocence, a purity, or perhaps I wanted to think that. In any event it captured me long enough to stay around for the homily.

And it was quite the homily. Could have sworn the guy was Catholic...except I haven't heard such a homily at a Catholic wedding in...I was going to say a long time...but can't think of ever hearing it. Guess I've read such stuff in encyclicals and the writings of John Paul II.

In any event, the Royal wedding spoke volumes about the meaning of Marriage, not just in the homily, not in all the happy stuff, but...but in the thing itself. This was a big deal, but weddings are big deals period, why?

If it was just about the happiness of the couple and their commitment to each other, then why the need to involve so many, why the ceremony, the pomp, the splendor? They could, as so many modern couples think, just privately commit to each other in their jeans and birkenstocks, don't you think?

But in the Royal wedding we have the thing itself, the meaning of Marriage. For "better or worse" marriage isn't about the couple at all, or at least not specifically about the couple. Its about the race, the species, and in the case of the Royals, its about the dynasty. In other words its all about the next generation.

For England, sterility, intentional or otherwise, is not acceptable. There must be a next generation. The prince must find a mate, must mate, must reproduce...or there is no more England.

Personal happiness, compatibility, all that...not. This marriage is about England. William and Kate are just the players. And so is every marriage. Its about the dynasty. And while most of us are not earthly royalty, we are "heavenly royalty" and through our loins comes the Kingdom of God on earth. Be fruitful and multiply (as He allows).

Note: And no, the irony of all this didn't escape me: No country takes its royal dynasty as seriously as does England, yet England is one of the most sterile nations on the the planet and the British are in serious demographic decline. If things continue as they are, the sun will set on the British Empire around 2050 (as it will with most western European peoples). But with each marriage there is new hope, new encouragement, a new beginning. Perhaps the new royal couple will be "open to life" on their wedding night  and....
Posted by Tim Rohr at Saturday, April 30, 2011