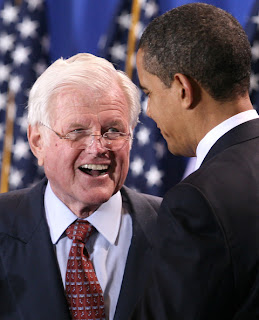 I get this question so often that I might as well write a column about it: “How can they (politicians) be Catholic and support abortion?”

As we know, some of the most obstinate public proponents of abortion over the last few decades have been Catholics. The current crop of influential Catholic pro-aborts include names like Pelosi, Biden, Kerry, and Sibelius. But the “godfather” of Catholic pro-aborts was Ted Kennedy. For decades Kennedy prowled the Senate like a roaring lion looking to devour anything that even smelled like a pro-life bill.

Kennedy even opposed the ban on partial-birth abortion wherein a nearly fully delivered child, legs and arms flailing about, is stabbed in the back of the head and has its brains sucked out. We have laws against killing dogs that way! With Catholics like that, who needs atheists?

How did we get here? How did prominent and even celebrated Catholics come to be such enemies of life in the womb despite Church teaching? And further, how do they yet speak and act as upstanding Catholics with a seemingly clear conscience?

Anne Henderschott in “The Politics of Abortion” explores this phenomenon and traces its origins to a secret meeting at the Kennedy compound in Hyannisport in 1964 between Robert and Ted Kennedy and three well-known theologians (you can find their names in the book).

The objective of the meeting was to find a way in which the Kennedy’s, sensing the political shift towards abortion rights, might support abortion and yet remain Catholics with a clear conscience.

One of the theologians -and coincidentally the architect of the most controversial document of Vatican II - came up with the answer and it reads like this:

“Catholic politicians in a democratic polity might advocate legal restrictions on abortion, but in so doing might tolerate legislation that would permit abortion under certain circumstances if political efforts to repress this moral error led to greater perils to social peace and order.”

In other words a Catholic politician (according to Father X) could in good conscience support abortion if there was sufficient reason.

Of course, that is not true. The Church considers direct abortion to be “intrinsically evil”. That means that it is always evil regardless of the circumstances and there is NO “greater peril” that would ever justify it.

But, coming as it did from an influential priest-theologian, and in the presence of two other priests, and even a bishop - which gave it the air of an imprimatur , the Kennedy’s had what they wanted.

While Robert was soon to die, and several years would pass before Ted would speak openly as a hardened pro-abort, the cancerous idea worked its way deep into the Catholic social and political circles which were heavily influenced by the Kennedy’s and gave birth to a whole generation of Catholic politicians who openly support abortion with a good conscience as per the Hyannisport prescription of Father X.

But while the Kennedy connection engendered the liberal license needed for Catholic politicians to support abortion, something more was needed to extend that license to the  average Catholic whose vote was needed to put and keep these guys in office.

Some critics believe that this license was provided by the “seamless garment” concept put forth by a prominent U.S. cardinal in 1983. In a speech at an influential Catholic university, the cardinal essentially criticized pro-lifers for not being as equally opposed to other social ills such as poverty and the plight of undocumented immigrants.

Intentional or not, the “seamless garment” idea relativized abortion, reducing it to one issue among many and granted Catholic voters the license to support pro-abortion candidates so long as they cared about poverty, illegal immigrants, or whatever pet social issue one cared about.


Then-Cardinal Ratzinger (now Pope Benedict XVI) carefully slammed this idea in a letter to the U.S. bishops during the 2004 presidential campaign which pitted pro-abortion (and Catholic) John Kerry against pro-life (but pro-Iraq war) George Bush.

Ratzinger stated that not all issues carry the same “moral weight” and that abortion and euthanasia were to be considered “grave sin” in contrast to general social evils such as poverty and war.


Nevertheless, the USCCB employed the “seamless garment” approach to moral issues in its 2008 document “Faithful Citizenship”. And even after intense criticism for “handing Obama the election”, the USCCB has rereleased it with few changes for the 2012 campaign, effectively permitting, once again, Catholics to vote for pro-abortion candidates like Barack Obama because he cares about unemployment.


Perhaps now that Obama has stiffed the USCCB by refusing to compromise on the contraceptive mandate, the bishops may want to trade in that seamless garment for sackcloth and ashes, or at least start using words like “grave sin”.


For further reading:
How support for abortion became a Kennedy dogma