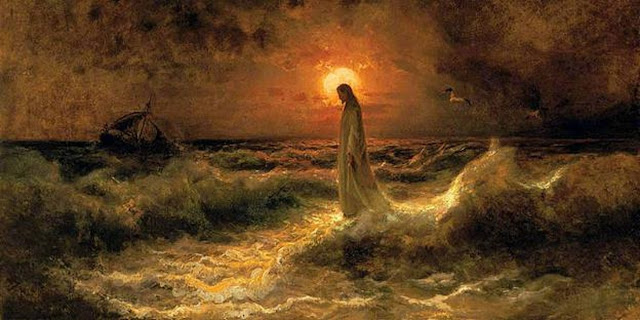 As usual, there are differences in the Gospel accounts, and some "anti-primacy of Peter types" like to stress that Mark and John do not mention Peter walking on the water to Jesus, as does Matthew.

However, as is well-known, John's Gospel is not considered one of the "synoptics" because John had an entirely different aim in writing his gospel. So no surprise that John's Gospel leaves out details that the synoptics do not.

And as for Mark, it is well-known that Mark was Peter's "secretary" and it can be easily understood that Peter, in dictating to Mark, did not want to highlight himself in any way.

But that controversy aside, Mark notes something that the other two Gospel's do not: "...and He would have passed by them."

This was something I had not seen before: "and he would have passed by them." The other accounts have Jesus walking directly to the boat and the distressed apostles.

Why Jesus "would have passed by them" is answered in the next part of Mark's Gospel: "But they, seeing Him walking upon the sea, thought it was a ghost, and cried out."

"Crying out" to God is consonant with David, with Job, with Moses, with the blind man ("Son of David have pity on me") with the woman with the hemorrhage (who touched the hem of his garment) and just about everyone of any consequence in every corner of Scripture.

Praying is one thing. Crying out is another. At least I think so. But apparently that's what it takes to get Jesus to not "pass by them"...or me...or you.

There's more in Mark's account that I've missed, particularly: "And seeing His disciples straining at the oars, for the wind was against them, about the fourth watch of the night He came to them..."

Fortunately, the best "protestant" bible commentaries often quote "the Fathers," who were Catholic (since that's all there was then). So, insofar as the writers of commentaries quote the fathers, I think we can rely on them.

One such commentary is the "Pulpit Commentary" and rather than tell you what it says about this part of Mark's Gospel, I will copy it below and link it. But the main thing to note is that Jesus waits until Evil has its hour...and then God shall have His Day.

By the way, this is a great series of teachings about how God does exactly what is described here in Mark: God's Astonishing Reversals.

And he saw them toiling in rowing; for the wind was contrary unto them: and about the fourth watch of the night he cometh unto them, walking upon the sea, and would have passed by them.

Verses 48-50. - And he saw them toiling in rowing. The Greek is, according to the best readings καὶ ἰδὼν (not εϊδεν) αὐτοὺς βασανιξομένους ἐν τῷ ἐλαύνειν. The word βασανιξομένους means more than "toiling;" it means literally, tormented. It is well rendered in the Revised Version by distressed. It was only by painful effort that they could make head against the driving storm blowing upon them from the west, that is, from the Mediterranean Sea. About the fourth watch of the night he cometh unto them, walking on the sea. The Jews formerly divided the night into three watches; but when Judaea became a Roman province they adopted the Roman division. The Romans changed the watches every three hours, lest through too long watches the guards might slumber at their posts. These periods were called "watches." If the night was short, they divided it into three watches; if long, into four. Therefore the fourth watch began at the tenth hour of the night, that is, at three o'clock in the morning, and continued to the twelfth, that is, to six o'clock. It would seem, therefore, that this storm lasted for nine hours. During that time the disciples had rowed about twenty-five or thirty furlongs, that is about three Roman miles - eight furlongs - making a mile. The Sea of Galilee is not more than six miles broad at its widest part. They were therefore now (ἐν μέσῳ τῆς θαλάσσης) "in the midst of the sea," as St. Mark expresses it; so that, after rowing for nine hours, they had hardly crossed more than half over the sea. The Sea of Galilee is, speaking roughly, about twelve miles from north to south and six from east to west. It may be asked why our Lord suffered them to be tempest-tossed so long; and the answer is:

1. It was a trial of their faith, so as to urge them to seek more earnestly the help of God.

2. It was a lesson to accustom them to endure bard-ness.

3. It made the stilling of so tedious and dangerous a storm all the more grateful and welcome to them at last. The Fathers find a fine spiritual meaning in this. Jerome says, "The fourth watch is the last." So, too, St. Augustine, who adds that "he who has watched the ship of his Church will come at length at the fourth watch, at the end of the world, when the night of sin and evil is ended, to judge the quick and the dead." Theophylact says, "He allows his disciples to be tried by dangers, that they may be taught patience, and does not come to them till morning, that they may learn perseverance and faith." Hilary says, "The first watch was the age of the Law, the second of the prophets, the third of the gospel, the fourth of his glorious advent, when he will find her buffeted by the spirit of antichrist and by the storms of the world. And by his reception into the ship and the consequent calm is prefigured the eternal peace of the Church after his second coming" (see Wordsworth's 'New Testament:'St. Matthew 14). He walked on the sea. This he did by his Divine power, which he possessed as God, and which, when he pleased, he could assume as man. Infidelity is at fault here. Paulus the rationalist, revived the ridiculous idea that Christ walking on the sea merely meant Christ walking on the shore, elevated above the sea; but the interpretation was rightly denounced by Lavater as "a laughable insult on logic, hermeneutics, good sense, and honesty." Was it because our Lord simply walked on the shore that the disciples "cried out and were troubled"? Was it merely for this that they were "sore amazed at themselves beyond measure and wondered"? Yet such are the shifts to which unbelief is reduced when it ventures to measure itself against the acts of Omnipotence. He would have passed by them. An expression something like that in St. Luke (Luke 24:28), "He made as though he would go further," although there the Greek in St. Luke is different (προσεποιεῖτο πορρωτέρω πορεύεσθαι). Here it is ἤθελε παρελθεῖν: literally, he wished to pass by them; so at least it appeared to the disciples. It has been suggested that our Lord did this that the disciples might more clearly see how the wind was stilled in his presence. They supposed that it was an apparition (ἔδοξαν ὄτι φάντασμα εϊναι); literally, a phantom. Why did they suppose this? Partly from the idea that spectres appear in the night and in the darkness to terrify men, and partly because in the darkness they could not so readily recognize that it was Jesus. Then the fact that our Lord" would bare passed by them," flitting past them as though he eared nothing for them and had nothing to do with them, but was going elsewhere; this must have increased their terror. But now came the moment for him to calm their fears. Straightway he talked with them soothingly. Be of good cheer: it is I; be not afraid. Now, Christ did this that he might teach his disciples to conquer fear and temptation, even when they are very great, and that so the deliverance and the consolation might impress them all the more powerfully and sweetly in proportion to their former terror. "'It is I' - I, your Lord and Master, whom you know so well, and of whose goodness and omnipotence you have already had so much experience; I, your Master, who do not come to mock you as a phantom, but to deliver you both from fear and from storm." It will be observed that St. Mark omits all mention of Peter's act of faith "in going down from the boat, and walking upon the waters to come to Jesus," as recorded by St. Matthew (Matthew 14:28). Throughout this Gospel, as already noticed, St. Peter is kept in the background.

At that time, when it was late, the ship was in the midst of the sea, and Jesus alone on the land. And seeing His disciples straining at the oars, for the wind was against them, about the fourth watch of the night He came to them, walking upon the sea, and He would have passed by them. But they, seeing Him walking upon the sea, thought it was a ghost, and cried out. For they all saw Him, and were troubled. Then He immediately spoke to them, and said to them, Take courage; it is I, do not be afraid. And He got into the boat with them, and the wind fell. And they were utterly beside themselves with astonishment, for they had not understood about the loaves, because their heart was blinded. And crossing over, they came to the land of Genesareth and moored the boat. And when they had gotten out of the boat, the people at once recognized Him; and they hurried through the whole country, and began to bring the sick on their pallets, wherever they heard He was. And wherever He went, into village or hamlet or town, they laid the sick in the market places, and entreated Him to let them touch but the tassel of His cloak; and as many as touched Him were saved.